Hitchhiking The Outback: Thumbs Up Australia

Author of the book Thumbs Up Australia, Tom Parry, was kind enough to send me a copy to review on foXnoMad. The book about his hitchhiking adventure across Australia with his girlfriend is an inspirational read for any traveler. I’d like you to enjoy the book as well – I’ll send it to the first person to leave a comment on this post.

“Hitching teaches you to make the best of wherever you are.” – Tom Parry

Tom Parry and his French girlfriend Katia Garnaud took off on an 8,000 mile tour of the Australian outback, from Adelaide up to Darwin, Brisbane, Sydney, and Melbourne and back again, hitchhiking the entire way. The book, Thumbs Up Australia, is both a narrative and Parry’s travel journal.

It’s really Parry’s personal accounts, thoughts, and interactions with Katia that bring the book to life while at the same time the outback seduces your imagination detailing his journey. The book starts slow – it’s Parry’s second hitchhiking endeavor in Australia – and Katia is reluctant. It’s really her voice that echoes the hesitation that most of us would have of asking for rides from complete strangers, for an entire trip.

“It is essential that the hitchhiker adopt an appearance of eagerness.” 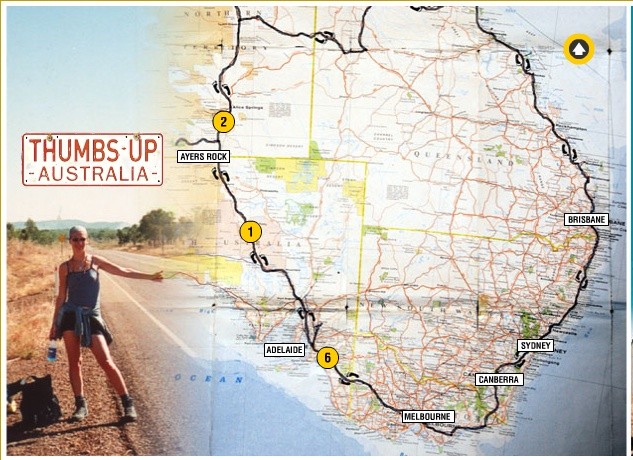 The hitchhiking process begins smoothly and seems to flow, until the sheer number of ride changes and characters Parry and Garnaud encounter force you to appreciate what an undertaking such a trip is. And getting a ride is just the part of it. Dealing with silences, or being harassed by mosquitoes while waiting in 40 degree (Celsius/104 Fahrenheit), for a ride that may not come are all part of the journey.

For every ride that stops, there are countless other drivers who whizz on by. The pair keep walking the highways until someone comes along and each ride becomes a journey within a journey. There are recounts of hitchhiker horror stories, murders and those who were never found. Rides from truckers and their thoughts on Australia’s indigenous problem and single mothers trying to shag every bloke along the way.

As their journey winds to an end and Parry and Garnaud make their way full circle there is the taste of both sadness and optimism. One more frontier conquered in a world mostly discovered.