This is a guest post from Vera Marie, a free lance writer who blogs about books, movies and travel at A Traveler’s Library.

I was hooked on the Minoan culture, when I first saw their art. These beautiful creations had been conceived by an artist who lived 2000 years ago. As it turned out, that first Minoan painting I saw was painted in 1905, a recreation of the Minoan (1900-1500 B.C.E.) wall murals at Knossos.

My husband and I had put Knossos, near Heraklion, at the top of our must-do list for our visit to Crete. We had already gazed at the high walls and the Lion’s gate of the later-period Mycenaean palace attributed to Agamemnon in the northern Peloponnesus. Now we were following the Myceaneans’ path south to Crete for our own more peaceful raid.

The Aegean Sea laps the northern shore of Crete and the warm Libyan Sea caresses the south shore, making Crete the dividing line between Europe and Africa. Warm, sandy beaches lapped by turquoise waters, include the only palm-shaded beach of Europe. The appeal of lolling in the sun competes with the lure of trails wander over mountains and deep gorges. Or you can do as we did, and chase the Minoans all over the island.

We started with Knossos, a glorious site partially (and questionably) reconstructed by Arthur Evans, the man who unearthed the ruins from pieces that local farmers found to be a bit of a nuisance. From the many guides hanging out by the gate, we hired a young woman who explained Arthur Evans as well as what is known of Knossos. 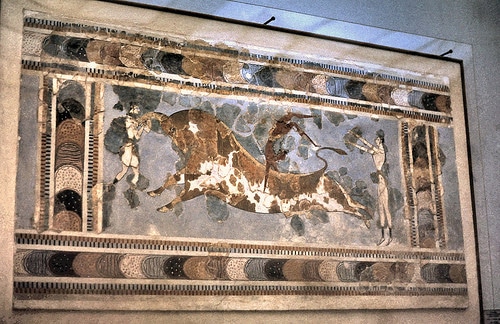 Legends told of the land where the people worshipped the Minotaur—half bull, half human– and from this legend and stories of King Minos, Evans derived the name Minoan for the civilization. According to the myth, every year Minoans came to Athens (then a poor city state) and carried off a flock of young men and women to be sacrificed to the Bull-god. The young men performed in the bull-jumping—a ballet of beast and man illustrated on the Minoans’ art.

Because the Minoan palaces lack the tall walls that surround Mycenaean ruins, and their art subjects tend to fishing boats, fashionable young men and women, dolphins and flowers, Evans concluded that they were an idyllic and peaceful society.  You can see rooms full of this art at the Heraklion Archaeological Museum.

Today’s reconstructed and brightly colored walls of the Knossos palace irritate purists, but I found it helpful to see this partially restored site before exploring the un-restored sites.  Gradually, as I meandered across Crete, picking my way over stony paths, I began to recognize the pattern—the grand entry, the storerooms for wine and grain, the places of worship and tiring rooms for the priests. 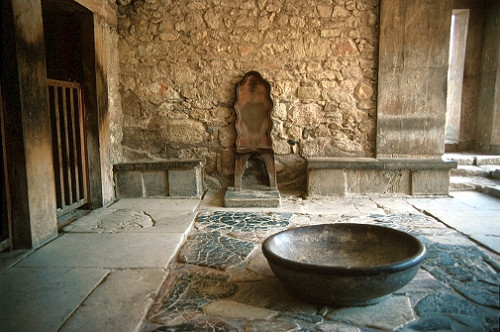 In the mountains above Knossos, we followed a sign that said “Minoan palace.” The country lane led through a vineyard and ended just in front of a collection of rocks in the pattern of an ancient house. The Cretan farmer’s house, built of the same rock, sat a stone’s throw away.

We went on to stop at Minoan ghost palaces scattered across Crete. From every major or minor palace, glorious views greeted us—panoramas from the edge of a mountain or ocean views.

The Minoan outpost called Akrotiri on nearby Santorini stands as it was on the day a volcanic eruption buried it. (A roof over the excavation collapsed several years ago, and reopening has been delayed several times. You probably will not be able to enter it in 2010.) Strangely, unlike Pompeii, no bodies were found. The people must have escaped by boat before the final eruption.

The Mystery Of The Minoans

Although archaeologists discovered several samples of writing in two different scripts, one has only an inventory list and the other has never been fully deciphered. Although the bull figure dominates art, no concrete evidence of bull pens or the legendary bull jumping arenas were found. The lack of walls seems to indicate a peaceful kingdom, but some believe they practiced human sacrifice. Although it was long believed that the eruption of Santorini’s volcano spelled doom for the Minoans, new evidence disproves that theory. Akrotiri’s discovery led to theories that the Minoan settlement on Santorini was the true Atlantis—an intriguing set of speculations.

If you love a good mystery, take a trip to Crete and go in search of the Minoans.

See more information on the Minoans as part of this site about Ancient Greece. Don’t miss the site’s great maps of the topography of Crete, modern cities, and ancient Minoan as well as Greco-Roman settlements.

Thank you very much Vera for the guest post. You can read more of Vera’s writing at A Traveler’s Library, a blog about books, movies, and travel.