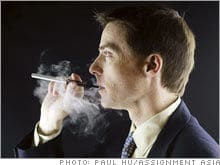 The China based company Ruyan, sells a $210 nicotine atomizer that delivers the stimulant without tobacco or tar.

The name means “like smoke” and the battery powered device is currently waiting for FDA approval in the US. Certainly a healthier alternative, since nicotine is not a carcinogen. With smoking being banned in France and England, perhaps we’ll see Ruyan in the hands of these famous smokers?

So, does this all mean that smokers can continue with the real thing and hope for FDA approval? I’ve long said the cigarette industry could save itself by providing healthier alternatives.