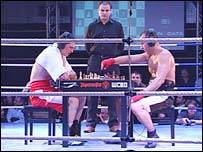 The Germans have combined the two, literally round-by-round.

The rules are simple. There is one round of chess – and then one round of boxing. Punching power alternating with brainpower.

If you are wondering how they can move the pieces with their boxing gloves on, well, they take them off before the rounds of chess.

All in all, you have 11 rounds in which to either checkmate your opponent – or knock them out.

The first ever championship is being hosted in Berlin. Chess boxing has become so popular that it is now being taught in German schools. And we though the Swiss were weird.