My Interview With Jamie James, Author of The Snake Charmer - foXnoMad

My Interview With Jamie James, Author of The Snake Charmer 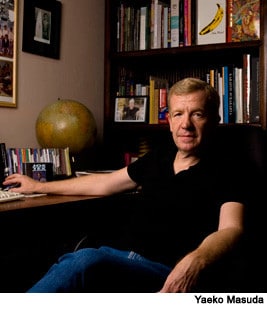 Jamie James is the author of The Snake Charmer, which I reviewed last week. Mr. James was kind enough to answer a few questions about the book, his travel experience, and living in Indonesia. Below is the full interview.

How did you first find out about Joe’s story, and what about his story inspired you to write the book?

I first heard about Joe Slowinski from his obituary in the newspaper, which a friend had clipped for me. It came out more than a month after he died — 9/11 just ate up the news media. As soon as I read it, I thought, this would be a fantastic book — what a story! The sheer drama of it seemed so compelling. I had an instinct that a life that ended that way must have been interesting from childhood on — and it proved to be true.

You said at the end of the book, you sorely felt the loss of Joe, although you’ve never met him. What was it about Joe that you connected with?

The review in FoxNomad already said it: it’s his purity. Everything in the guy’s life was focused around his passionate desire for knowledge about the animal world, specifically reptiles. It gave his life an intensity that most people never glimpse.

How difficult was it traveling inside of Burma?

It’s not difficult at all, if you’re willing to pay. You can only travel outside Yangon on incredibly expensive tours arranged by government-owned travel companies, which charge you a fortune for run-down hotels and the really bad food they serve foreigners. It would be different if the money were going to the workers, but it isn’t. The budget for your trip includes hundreds of dollars of “fees” that are obviously built-in bribes.

Did you face any difficulties with the Burmese government while researching for the book and were people reluctant to speak with you?

No, as I said, there’s no problem getting things done there — so long as you pay. Everyone was very open about talking to me, as there was nothing particularly sensitive about my subject. Joe was tremendously popular — everywhere I went, people who had known Joe wanted to tell me about him.

What drew you to Asia and how has living in Indonesia influenced your writing?

I’ve been a traveler all my adult life — Europe in my 20’s, Latin America in my 30’s, and saved the best for last. I always dreamed of Asia as a kid growing up in Houston. But I don’t think living here has actually influenced my writing, except insofar as it has provided me with many subjects. With a good internet connection, I can do what I do anywhere.

What are the names of your restaurants and the best thing on the menu?
(Mr. James and his partner own two in Seminyak, Bali.)

I will certainly take you up on that at my next opportunity, thank you for the invite and thank you for taking the time to answer my questions! My readers and I appreciate it. You can read more about Mr. James and the book at TheSnakeCharmerBook.com.