My Interview With Tom Parry, Author of Thumbs Up Australia - foXnoMad

My Interview With Tom Parry, Author of Thumbs Up Australia 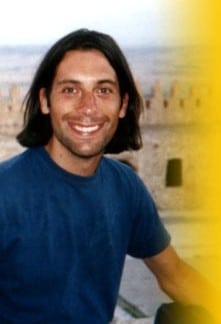 Tom Parry is the author of Thumbs Up Australia which I reviewed back in April. Tom and his (then girlfriend, now wife) Katia hitchhiked their way across Australia and Thumbs Up Australia is his personal account of the adventure. He was kind enough to answer some of my questions about his trip, how it effected his relationship with Katia, and his return to “normal” life.

Why did you decide to go back to Australia and not somewhere new?

I had travelled to many places in the mean time but Australia retained an allure that had never gone away. As I describe in the book, it is the attraction of the emptiness, the unknown and unexplored parts of the Outback that attracts me most to Australia. I have not travelled for a great length of time in Oz for several years but even now still yearn to do so again.

How does one prepare for a long hitchhiking journey?

There are certain essentials: get up early; find a good spot a substantial walk outside the town limits, preferably on a straight stretch of highway; attempt to be presentable but not too well-dressed; most importantly of all, have enough provisions for a lengthy wait in heat and/or heavy rain. If one is hitchhiking for a long time one should familiarise oneself with the possible routes and be prepared for any number of unexpected diversions. For me, the greatest aspect of hitchhiking is that you cannot plan to be in a particular town on a particular day, so it offers spontaneous opportunities of being in places one would never have dreamed of deliberately visiting as a tourist.

It seemed that you and Katia kept a distance from the people you hitched with. Was this planned, a result of your personalities, or something that just happened?

On the contrary, I never set out to keep a distance from the people we got lifts with. I found that hitchhiking is one of the most unique ways of forming a brief, but sometimes meaningful, friendship with someone who was – until a few hours before – a complete stranger. I suppose we did keep a distance in the sense of not wanting to intrude or to impose our own views on the person being kind enough to offer space in their vehicle. We agreed that I would always sit up front and ask the first questions and normally, once the ice was broken, we would all talk happily about whatever the driver wanted to talk about. I think it is very important when hitchhiking to allow the driver to guide the conversation; but more often than not he or she is only too happy to have someone to speak to, especially in a country as vast as Australia.

Did the trip strain your relationship with Katia during the experience?Was it difficult to find alone time or be intimate for you both during the trip?

The trip solidified our relationship more than straining it. There were of course days when Katia thought the whole enterprise was ludicrous. I recall she was particularly infuriated with me when I insisted we walk a long way from the place we had stayed in in order to get a ride. This annoyed her because she was carrying a heavy rucksack, filled with clothing I kept telling her was unnecessary! Whatever the case, we are happily married today, several years on from our hitchhiking trip around Australia.

In hindsight, what regrets do you have about hitchhiking the Outback and what would you have done differently?

I have no regrets whatsoever. The only thing I would have done differently is continue even further around the west coast and the Kimberleys in Western Australia.

What was it like to readjust to the ‘real’ world?

Adjusting to the “real” world was made worse by the fact that most people took no notice of the fact I had hitchhiked and instead only heard the word Australia. There are so many backpackers and year-out students in Australia that the assumption is that one has been on the same trail as everyone else. I felt as though the amazing, unique sights we had seen because we hitchhiked, and the characters we had met, could not be explained easily to people back home, which was one of the main motivations for writing a book. I have never properly re-adjusted and although I am now in a proper job, I still suffer from compulsive wanderlust.

What are your current travel plans?

I travel for my day job as a journalist from time to time. In recent years I have been in the Democratic Republic of Congo, Kenya, Benin, Niger, Ivory Coast and Western Sahara. I was intrigued by northern Pakistan on a visit there and would very much like to return to that region. I would also love to undertake a long journey around Burma.

Thank you for taking the time to answer my questions Tom (and congratulations on the marriage!). Your book certainly generated a good conversation from others who’ve also hitched in Australia and captured our imaginations while inspiring us at the same time.

Thumbs Up Australia is available for order on Amazon.