This is a guest post by Nick Ball, the editor of the in-depth island information guide Lanzarote Guidebook. Visit their site to download a 96 page guidebook to Lanzarote – free of charge. 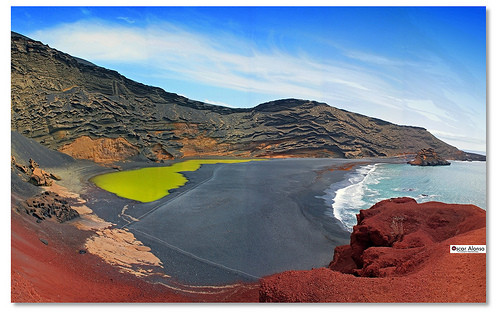 Lanzarote is one of the seven Spanish owned islands that comprise the Canarian archipelago,  which are located about 80 miles off the West African coast of Morocco. This privileged position that creates a clement climate all year round.  Characterized by very low rainfall (as you’d expect so close to the Sahara) and average temperatures of 20 Celsius – even in the depths of winter.

These climatic conditions have helped the Canaries to secure a position as one of the most popular holiday destinations in Spain.  Collectively accounting for around 9.5 million foreign visitors during the course of 2008 alone.

Yet despite the popularity of the islands, some, such as Lanzarote, which is at the eastern most end of the chain, have managed to retain much of their original charm.

Here for example visitors will not encounter any high rise buildings or hotels – as these were all banned during the 1970´s.  The same goes for ad hoardings and billboards – also conspicuous by their absence.  Whilst outside of the three main resorts of Puerto del Carmen, Costa Teguise and Playa Blanca island life seems to carry on much as it has for centuries.  At a slow, rural pace. 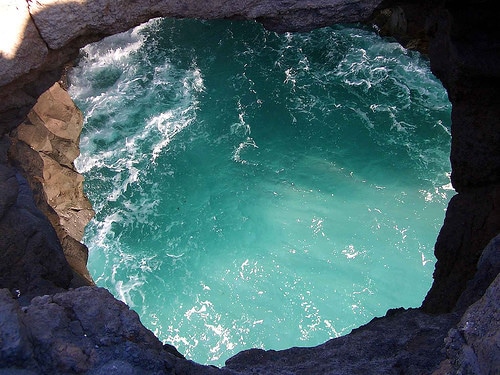 So what is Lanzarote´s secret?  How does an island that relies almost totally on tourism for its economic survival remain so untouched?

For the answer we have to turn to a local artist – who first came to prominence at the vanguard of the Spanish surrealist movement in the 1950´s.
Before moving to New York to rub shoulders with the likes of Andy Warhol under the patronage of the wealthy Rockefeller clan.

César Manrique was born in the island capital of Arrecife in 1919 and developed an intense love for his birthplace from a very young age.  The legacy of family holidays to breathtaking natural beauty spots such as the huge beach and bay at Famara and Lanzarote´s awe inspiring volcanic region.  Which was created by a huge wave of seismic activity that shook the island during the 1730´s.

Manrique´s love of nature made him an ecologist long before the term gained common credence.  Aware of the fact that the Spanish dictator General Franco planned to open the Canaries and the Costas up to tourist development in order to help revive the nations flagging economy Manrique returned to Lanzarote in the late 1960´s to fight for the islands survival.

Fortunately an old family friend – Pepin Ramirez – occupied the position of island governor.  A like minded soul who shared Manrique´s concerns about the future.  And whilst both accepted that a degree of tourist development was vital for Lanzarote´s economy the pair fought to ensure that – as far as possible – this would be achieved in harmony with the islands natural, volcanic beauty.

Against the odds they secured the ban on high rise buildings and advertising hoardings.  Manrique then went on to develop alternative attractions for visitors to the golf courses and water parks springing up elsewhere in Spain.  In order to illuminate an alternative path for the evolution of tourism on the island.

The first real expression of this philosophy was the transformation of a huge, collapsed lava tube called the Jameos del Agua.  Which with the help of local architect Jesus Soto, Manrique turned into a dramatic subterranean lagoon, nightclub and concert venue.

This creation was so impressive that it won international plaudits and acclaim.  So putting Lanzarote on the map as the hot new holiday destination and drawing in a host of VIP visitors and Hollywood actors, such as Peter Sellers, Omar Sharif and Rita Heyworth.

Manrique went on to create a total of eight different tourist sites. All of which remain the most popular visitor attractions on Lanzarote to this day.  Whilst also helping to secure UNESCO protected biosphere status for the island in 1994, two years after his untimely death.