Following The Footsteps Of The Beatles On The Reeperbahn, Hamburg - foXnoMad

Following The Footsteps Of The Beatles On The Reeperbahn, Hamburg

“I might have been born in Liverpool – but I grew up in Hamburg.” The Reeperbahn in Hamburg, Germany is the bustling nightlife center of the city, home to one of Europe’s largest red light districts, and also where the Beatles began to make their mark on music during the early 1960s. The Beatles primarily played in 4 clubs at the Reeperbahn and you can retrace their footsteps at each one while capturing a feel for the “sinful mile”.

It’s where the Beatles first played in Hamburg and by visiting you’ll get an idea of their humble beginnings. You’re better off showing up before 6pm or so, after which you’ll have to pay a cover to watch one of the bands that are booked for the evening. (The Beatles had to play hard, fast, and entertain the crowd anyway they could here which was difficult at times; fights breaking out during shows was common.) The drinks are cheap in the cramped and loud Indra Musikclub which is a great place to catch a show because even if you’re at the very back of the place, you’re not too far away from the stage (or bar). 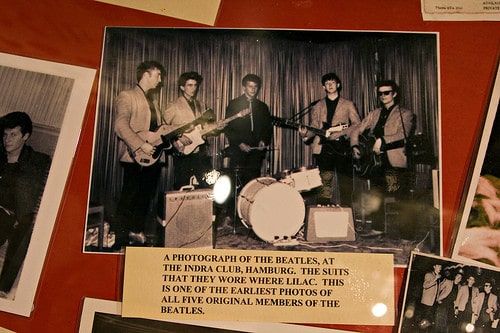 This is large concert hall that’s hard to miss on the corner of 36 Große Freiheit; it alternates during the day between club, bar, and concert hall for rock, dance, salsa, and Kelly Clarkson. The interior of the Kaiserkeller is larger than the Indra, but still gives an intimate feel when there’s live music. The Beatles didn’t play very long here (only a few months during 1960) and it’s not a place you’ll hang out long unless you’re watching a concert. Unfortunately there is nothing of the Star Club left but the plague below. It’s hidden on a side street off 39 Große Freiheit near a Thai dance club and strip bar standing on a wall by itself. The Beatles played at the Star Club for 7 weeks at the end of 1962 and it’s the only one of these Hamburg clubs where Ringo Starr played with the band (having replaced Pete Best). The original building burned down in 1987 but the plaque commemorates other later famous musicians who played there like Little Richard, Ray Charles, Cream, Jerry Lee Louis, and Black Sabbath to name a few. Below is a live recording of the Beatles with some footage from the Star Club in 1962.

Lots Of New Beatles, Not As Much Old

Beatles fans will appreciate stopping by each of the bars that are still standing, if not only for a few moments to see the atmosphere of the clubs that strongly influenced the band. Some of the other clubs the Beatles played at like The Top Ten (136 Reeperbahn) are also not in existence anymore and there are still many more across the rest of Hamburg. Parts of the Reeperbahn have tried to make more of the Beatles than is actually there – a Beatlemania Museum for example, as well as Beatles hot dog stands and resturants. These places are “Beatles” only by name and you won’t see much outside of the museum on the Reeperbahn.

The real spectacle is the Reeperbahn itself, notorious for it’s wild nightlife, sex shops, and rowdy bars that imprinted themselves on the Fab Four long after they left Hamburg.