What To Do In Seoul, South Korea On A 24 Hour Layover - foXnoMad

What To Do In Seoul, South Korea On A 24 Hour Layover 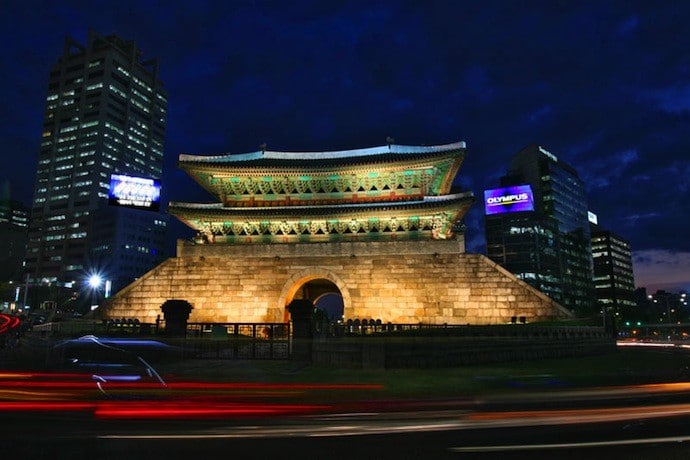 This is a guest post by Jason Demant, the co-founder of Unanchor whom I interviewed back in May of 2010. Since then, a few things have changed on the site where travelers can create and sell their own personalized itineraries. To give you an idea of what you can find on Unanchor, Jason and Chris Backe, share what they’d do if pressed to see Seoul in one day. (I’ve condensed this version.) This is Part 3 in a series that covers 3 of my sites. Catch up with Part 1: Earn Some Extra Travel Cash By Writing City Guides On UnAnchor and Part 2: How To Write Useful Travel Guides For Readers Of Your Travel Blog.

There are a few ways to get from the airport into Seoul — taxi, bus, express subway and commuter subway. Out of those, I highly recommend the commuter subway — called the Airport Railroad. It takes 53 minutes to go from Incheon Airport to Seoul Station and costs less than $4. From Seoul station, you’re just a few minutes from anywhere you’re likely to go.

To get to the first destination of the day, you’ll want to hop on line 1 towards City Hall. Three stops away is Jogno 3(Sam)-ga. Get off there and transfer to line 3, the orange line. You’ll want to head towards Anguk (or Daehwa). Two stops away is your stop, Gyeongbokgung. 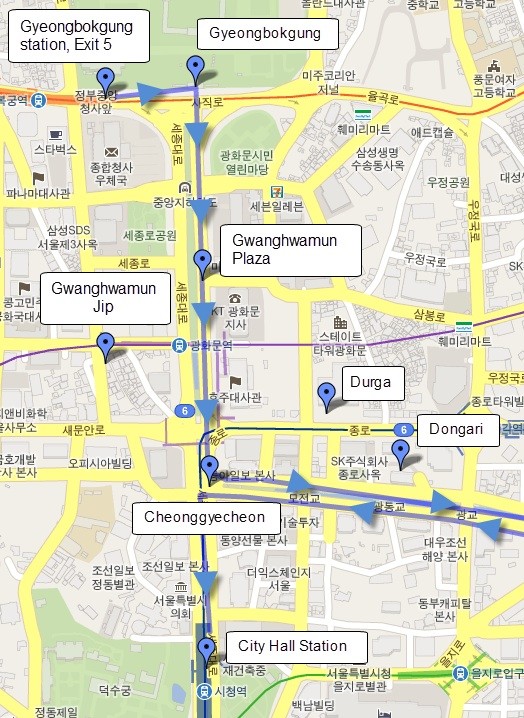 Gyeongbokgung (the “Palace Greatly Blessed by Heaven”) has one of the longest and most storied histories of Korean palaces beginning in 1395, three years after the Joseon Dynasty started. Later kings of the Joseon dynasty continued to expand, but the Japanese destroyed the palace during their invasion in 1592. Fast forward almost 270 years to 1867-68, when the palace buildings were reconstructed. They now form a massive 330-building complex with 5,792 rooms that stand on 410,000 square meters (4,414,000 square feet) of land.

The statue of Admiral Yi Sun-sin has guarded the Gwanghwamun (front gate) area, as well as the Gyeongbokgung palace area for decades now but the benches, museums, and virtually everything else is new. Engraved in stone is history for every year since 1392, the first year of the Joseon Dynasty. With panels running all the way through 2008 and plenty of blank spots, there is plenty of space for future history to be recorded. Look for it on the ground underneath the rushing water, nearest to either street.

Directions to Gwanghwamun Plaza: From Gyeongbokgung, walk out the front entrance – the plaza is right in front of you! If arriving from elsewhere, take line 5 of the Seoul subway system to the Gwanghwamun subway station. Take exit 5 or 6 to street level and look for the statue, the fountains, or the flowers. 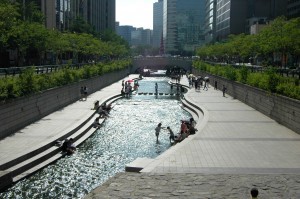 Cheonggyecheon is essentially a stream that runs 5.8 kilometers through downtown Seoul and eventually empties into the Han River. Opened in September 2005, it’s home to many pieces of art, both near the water and on the walls. It’s set about 15-20 feet below the street level, although there are stairs every few hundred feet going up to the street level.

You can walk along this stream for several kilometers – and be in a very different part of Seoul from where you started! Most people will walk for awhile, then head up the stairs towards a dinner, a drink, or a subway or bus ride to their next destination.

Directions to Cheonggyecheon: From Gwanghwamun Plaza, face Gyeongbokgung Palace and do an about-face. Look for a tall red and blue spiral-like tower on your left (see the previous picture) – that’s the start of the stream. 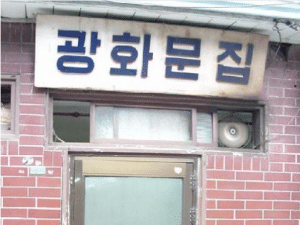 While there are plenty of food options along Cheonggyecheon, there are also plenty of Korean options around your next stop, Namdaemun. A few options (among many) around downtown. [Click for exact locations.]

Clothes, purses, shoes, sunglasses, belts, office supplies, souvenirs, and crafts – all this and much more is available at Namdaemun. Located just outside the Namdaemun gate, this maze of street vendors and brick-and-mortar stores offer an extremely wide variety of shopping in a fairly accessible fashion. 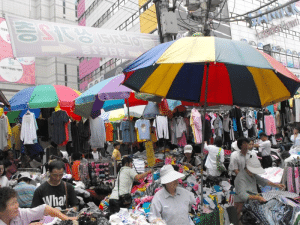 A ‘mall’ in Namdaemun is usually a collection of booths. All of the booths selling, say, women’s clothes, are organized by floor or are otherwise grouped together.

Directions to Namdaemun: Although a taxi ride from Cheonggyecheon would be fastest, you can also walk back along Cheonggyecheon to the red-and-blue spiral. Turn left and walk along the main road (Se-jong-dae-ro) for about 300 meters (1,000 feet) until you see City Hall station. Head to the Hoehyeon subway station on line 4. Take exit 5 or 6 to street level and you’ll find yourself in the area as soon as you climb the stairs to ground level. 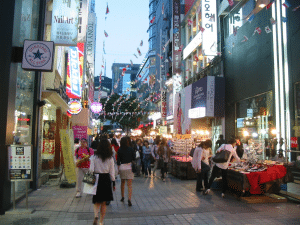 You’ll get sucked in almost immediately – there’s that much to see. It’s easy to get started – exit 5 or 6 of Myeong-dong subway station; take a left or right and wander some more. You’ll find a wide array of clothing (mostly women’s – guys, we have to look a little harder, but some good stuff here); lingerie, food, drinks, and so on. This is a perfect place to stock up on gifts for friends back home. Be aware that the area can get quite crowded on weekends.

Directions to Myeong-dong: Head back to the subway, then take line 4 one stop to Myeong-dong station. Exit 5 or 6 will put you in the middle of things.

There are dozens of restaurants in this area, so take these as just a few ideas. [Click for exact locations.]

One of the largest parks in Seoul, Namsan Park is located in the heart of downtown Seoul and complete with mountains, hiking trails plus recreational areas. The most scenic option is the Namsan cable car. While the ride is pretty short, it’s a nice chance to see Seoul lighting up as evening approaches. If the cable car doesn’t appeal, you have the choice to follow the road 2.1 kilometers uphill or take a yellow bus to the top.

Seoul Tower: The biggest attraction of Seoul Tower is the observation floor. At 236 meters, the tower ranks as one of the top 10 tallest in the world. The elevator ride (along with food or souvenirs) is the only thing you have to pay for – entering the building and seeing the view from about 10 feet up is free. On the back side of the Seoul Tower is an overlook, complete with a fence filled with locks. Bought by couples who write their name, date, other love notes, who then lock the lock around the fence wire. It’s not only allowed, but encouraged! (Tip: Look for the signs that say what to do with your key for a laugh.)

Cable Car option: Head back to Myeong-dong station, and find your way to exit 3. Once at exit 3, look left for a road that heads up the hill. This is about a 500 meter uphill hike along a street with no sidewalk, so watch out for traffic! Once you reach the top of the hill and the main road, head right and follow the road until you see it on the right. Get the round trip ticket for 7,500 won (~$6.65 USD) per person.

Bus or Walking option: Take the subway to the Chungmuro station (line 3), then take exit #2. Wait just outside the subway exit for bus #02. This bus will make stops at Namsan Park (the beginning of the walking trail, if you’re up for a walk) and will climb the hill before stopping near Seoul Tower. You’ll still have a couple hundred meters up a steep hill after exiting the bus – consider it the initiation for getting in.

How To Get Back To Incheon Airport From Namsam

Namsan isn’t too far from Seoul station. The easiest option would be to take a taxi there (should be less than $10). If the bus was enough for you, you could also take the bus back to Chungmuro station. Seoul station is only 3 stops away on line 4. From Seoul station you’ll want to look for the “Airport railroad”. Again, I would recommend the commuter line as it’s far cheaper and the time difference is not too significant.

In case you’re having so much fun in Seoul you decide to skip (or rebook) the next-day flight, these are a few recommendations close to N Seoul Tower and Myeongdong station. [Maps and addresses linked below.]

Obviously Seoul is large city you can spend many days in, so even if you’re not confined to a long layover this guide can help you create a loose set of plans around your particular trip. You can find Chris’ full Seoul itinerary on Unanchor and perhaps consider creating and selling a few of your own. Thank you Jason again for this series on travel planning. This is Part 3 in a series that covers 3 of my sites. For more see Part 1: Earn Some Extra Travel Cash By Writing City Guides On UnAnchor and Part 2: How To Write Useful Travel Guides For Readers Of Your Travel Blog.