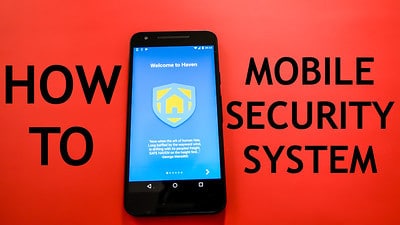 Your valuables are often vulnerable in hotel rooms and while some Airbnbs may be watching you, keeping an eye on your stuff while you’re out for the day hasn’t been easy. The Haven app however, is designed to be a complete surveillance system you can install on a spare Android phone to be your eyes and ears when you’re not around.

Haven was designed by the Freedom of the Press Foundation and the Guardian Project (Edward Snowden is president of the former) to combat an “evil maid” attack. Basically, an evil maid attack is sort of what it sounds like, securing your stuff from someone with physical access to it is really hard. A hotel room is a perfect example, you can’t always take everything with you during the day when staff come in to clean the room.

What Haven does is turn an Android phone into a listening and video recording device that’s automatically activated by sound and motion, alerting you by text if something fishy happens.

How To Setup Haven

As you can see in the video above, Haven is a relatively quick and easy setup. (Currently it’s Android only.) There are two ways to setup Haven: using wifi only or by getting a separate SIM card with data. The wifi-only configuration is cumbersome and much less effective if you’re using it for hotel room security so I’m not covering it here.

The first step is to grab Haven, a free download, from the Play Store and install it on an extra Android phone. Stick in an SIM card with data and launch Haven.

Once it’s installed, it will take you through some introduction screens.

Next, you set a phone number (most likely to your primary phone) where you can receive texts alerts if Haven detects something after it’s activated. Haven also works with Signal the private messaging app.

When you’re about to leave your hotel room (office, home, wherever you want monitored), open Haven, hit Start Now, and a 30 second countdown timer begins. That timer can be configured to be shorter or longer; notification intervals can also be set in Haven’s configuration options.

Many people have voiced concerns about personal privacy using Haven. It’s true, if Haven’s creators wanted to spy on you using the app, they certainly could. However, the fact that Haven is open source (it’s code open for anyone to review) as well as the reputation of its creators being on the line, it seems unlikely Haven is some mass surveillance scheme. Yes, Haven needs access to your phone’s camera, microphone, and motion sensors to work properly but most people give those permissions to all sorts of apps that hardly require it.

Ideally, you install Haven on a spare, brand new, Android phone with a new SIM to ensure they’ve not been compromised or there’s no malicious code running on the device. Otherwise, if you’re still a bit paranoid, just use Haven when you’re away from your hotel room and turn off the phone otherwise. Even for hotel rooms with a safe (they’re not too hard to open) placing a Haven-enabled phone inside can catch a glimpse of a thief, potentially leading to the recovery of stolen items. Haven can also be used as a security system while you’re sleeping to keep an eye on the door and give you piece of mind.

Although Haven is fairly power efficient, but if you’re going to be gone for extended periods of time, you might want to plug in the phone to an external charger like the Anker Slim 5000, PowerStick+, or just a wall outlet. Despite its potential drawbacks, Haven is the most comprehensive, inexpensive, and simple solution to monitoring your belongings when you’re not near them. Combined with these other tools, Haven can help you protect and possibly recover your stuff if it gets stolen while traveling.

RELATED
Ask One Of The World's Largest Providers: When Do I Really Need To Get Travel Insurance?