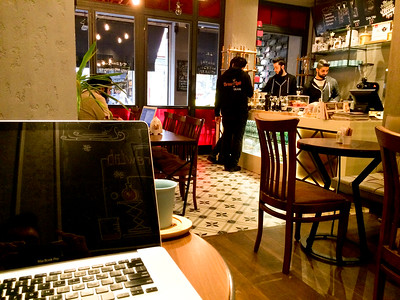 There are many reasons to use a VPN when traveling, but honestly, everyone should be on a VPN pretty much all the time. A virtual private network (VPN) can hide your Internet habits from your Internet Service Provider (ISP) and protect your privacy online for starters. For travelers, VPNs can get you cheaper airfare or access the free Internet in places with censorship but being so closely tied to your browsing habits, you need to choose the right VPN.

A VPN is essentially a tunnel between you and the Internet as far as anyone trying to observe your Internet connection. Imagine a helicopter flying over you, it can see you’ve entered a subway station but not where you go after that. Likewise, ISPs will be aware your Internet traffic is going through a VPN but not much else.

VPNs encrypt the traffic going through them it however there is a point in the encryption-decryption process that would allow any VPN to see your Internet traffic. You have to trust your VPN not to do that. Ideally, you’re looking for a VPN that logs a little as needed to run their service and is regularly audited by independent security audit to verify any claims.

NEVER Use A Free VPN

Never. Free VPNs make money through advertising and selling your information since they have no intrinsic incentive to provide good privacy. Never use a free VPN. Fortunately, the paid options aren’t expensive especially when you consider the benefits.

From the same organization based in Switzerland that created the secure email service ProtonMail, ProtonVPN is focused on privacy. They collect only the information needed to provide service and support (which is fantastic by the way) all laid out in a very clear Privacy Policy. ProtonVPN’s servers are speedy and some tiers have a Secure Core feature for enhanced protection.

RELATED
The Best Headphones For Travel

It’s also effective for getting access to Netflix but may not work in China (who have at the time of this article blocked them). *Cough* Paid plans also don’t block torrenting *cough* ProtonVPN’s mobile and desktop apps are intuitive to use and straightforward as well.

ProtonVPN’s a little more expensive than the competition – they do have a limited free version to try – but as one of the best overall VPNs, I would recommend their Plus service to cover all your devices.

Having recently reviewed their NordPass password manager, a few things stand out about NordVPN. They’re based in Panama outside the jurisdiction of these 5-14 Eyes. They’re also regularly audited by third parties, have over 5,000 servers in 59 countries, and NordVPN should work in China as well.

The interface is especially clean, almost minimalist, and it’s one of the fastest VPNs I’ve tried. Connections are solid (very little cutting out) and they have a good privacy record as well for their plans, which are heavily discounted for 2-3 year subscriptions.

For travel to China especially, ExpressVPN is a solid choice. ExpressVPN have a very good record on privacy, is audited regularly, and have VPN servers in 94 countries. Speed is also a particularly good on ExpressVPN (all VPNs will slow down your total Internet speed somewhat when in use). The only drawbacks I’ve found is their iOS version can be a little difficult to work with when switching connections. ExpressVPN comes with a 30-day money back guarantee so you can see if it fits your particular needs.

RELATED
Mint Mobile's Data Usage Might Be Confusing Your Phone

A few things about all of these VPNs listed above. They’re all called ‘no log’ VPNs which means they don’t track (outside of what’s needed to provide service and support) – claims which have been verified by an independent security audit. Without those independent audits from credible security experts any VPN claiming no logs – or anything else – has to be taken with a big grain of salt.

Another good option is VyprVPN, like the others offers steep discounts for longer subscriptions (usually over a year) or monthly plans. You’ve also got the option to try these VPNs usually either with a limited free version or trial period so you can choose the best VPN for your travels.

For those of you already using a VPN, this site will let you check to make sure it’s not leaking any info about you. To get the most effectiveness however, set your VPN to always on and don’t forget to secure your mobile devices as well.