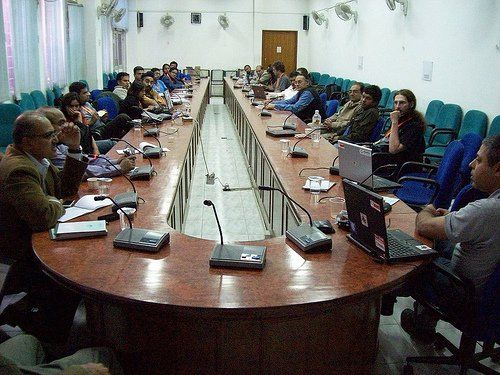 On Tuesday, I wrote about how to prepare and what to expect, mostly before, your business trip to India. Today, I want to give you a better sense of what to expect during and after a business meeting in India.

Brazilians have South American time, the Swiss are like their watches, and Indians start their meetings about 10-15 minutes late. As a general rule, whether it’s getting people organized, finding a cup of coffee, or because you were stuck in traffic things will get rolling slowly.

Once the meeting begins however, Indian businesspeople are completely work oriented, and meetings tend to lack the small talk common in the West.

During The Meeting – Quiet Women

I’ve noticed on several occasions that the Indian woman in any group that I’ve met with tend to stay quiet, even if they are in superior positions to the men in the room. India is a conservative society and women in the workplace is still not completely accepted. It’s best to direct your conversation equally to each member of a group, but don’t be surprised if your primary responses are from the guys.

You Will Be Fed Lunch – Of Traditional Indian Foods

Between 10-11am there might be a short (15 minute) pause for ‘tea time’. Leftover from the British colonial rule, this time is for tea, coffee, and cookies. The same break might be the time to socialize or some chit-chat, but that is best saved for lunch.

Lunches served for Indian business meetings are full course affairs, usually with several varieties of Indian vegetarian and meat dishes which will vary depending on the region you’re in. The foods maybe spicy so beware not to fill your plate if unaccustomed and load up on rice and bread. Your Indian counterparts will ask you if you like Indian food after your meal – it’s a good thing I do – hopefully you’ll appreciate the cuisine as well.

Some more things to expect during lunch

Generally at the end of Western business meetings there is some mild small talk – and India is no different. There are some questions common to India that I’ve found you will most certainly be asked.

RELATED
An Interview With Teras Cassidy, Who Takes Travelers On Awesomely Geeky Tours

India’s economic success is in the adaptability of its service industry. Your Indian colleagues will mold to better suit your (and other) potential customer’s needs. You may be asked how the company can improve its specific offerings, policies and procedures, and align better with the West?

It’s Not So Different

India’s adaptability is evident in how smooth and “European” any business encounter there feels. I’ve been pointing out the differences, but the similarities are far greater. One thing to take away is the personal relationships that develop from business meetings and you may want to take your colleagues up on their offer for tea next time you visit. Business meetings in India are not only good for the bottom line, but can foster new friendships.