Why Making Hotel Terrorism Saftey Plans Are A Waste of Time 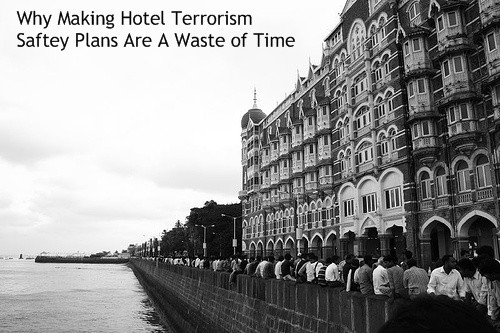 Spending the time to make a safety plan against terror during your next hotel stay is a complete waste of time. The statistics don’t support it, a single plan only protects you from a specific threat, and you’d need to be a damn good psychic in order to be successful.

I went ahead with a trip to India last week and stayed at the Oberoi hotel (one of the chains attacked in Mumbai) in Bangalore, despite the attacks. As tragic as those acts of terrorism were, there’s no need for you to spend time or worry over the possibility of a terrorist attack during your next hotel stay.

Dying In A Terrorist Attack Is Really, Very Rare

By comparison, he said, the average American has about a one in 8,000 chance of dying in an auto accident.

Consider the real dangers, not the unlikely ones (India for example has the second most dangerous roads in the world.) A general rule of thumb is that items that make it on the local or national news are the events that are least likely to happen, like plane crashes.

A Plan For An Unknown Type of Attack

There are plenty of ways that have been used to terrorize hotels in the past, bombs, arson, and recently gunmen. Any plan you make will end up being specific to a certain type of attack, which you can’t effectively predict. Jeffrey Goldberg suggests staying on the 4th, 5th, or 6th floor – but it won’t do you any good.

I try to be high enough to escape whatever chaos might occur on the ground floor, but not so high that I can’t be reached. I’m always of two or three minds on this question; it’s also not a bad idea to stay on a floor close enough to the ground that a jump will leave you with broken legs and nothing more.

In the case of the Mumbai attacks, several hostages were rescued by helicopter from the roof and nobody escaped by jumping out of a window.

Terrorism Is Prevented By Intelligence, Not Physical Security

Terrorism plots are stopped by police and investigative agencies doing good old fashioned detective work. It’s during the planning stages of a terrorist attack – gathering materials, reconnaissance, coordinating with cell members – that terrorists are most vulnerable and most likely to be stopped. The security measures you find at airports and around international hotels are the absolute last line of defense. Metal detectors, iron gates, and car searches only weed out the stupid and the crazy.

Watching Indian television this week I can’t tell you how many hotel security personnel, tasked with searching bags and inspecting underneath cars admitted to not knowing what they were looking for.

Gathering the materials and weapons for an attack is difficult but getting around physical security is not. (A terrorist caught at the entrance of a gate could simply start shooting people on the street – how would a hotel terrorism safety plan work then?)

The Attacks In Mumbai Were Tragic, But Surprisingly Ineffective

According to security expert Bruce Schneier, “At the same time, the attacks were surprisingly ineffective. I can’t find exact numbers, but it seems there were about 18 terrorists. The latest toll is 195 dead, 235 wounded. That’s 11 dead, 13 wounded, per terrorist.”

18 armed people intent on killing lots of innocents will be able to do just that, and last-line-of-defense countermeasures won’t be able to stop them. Intelligence, investigation, and emergency response. We have to find and stop the terrorists before they attack, and deal with the aftermath of the attacks we don’t stop.

In The End It’s All Luck

An analysis of the survivors of the Mumbai hotel attacks by Mr. Jenkins determined that there was no single successful strategy.

The compelling survival stories of travelers who were caught up in the three-day siege on Mumbai show there was no pattern to what ultimately saved them. Some barricaded themselves in their rooms while others took cover in hotel conference areas or simply fled.

Lynne and Ken Shaw of Wales told the BBC that they hid under a table while the attackers stormed the Taj Mahal Palace. In the interview, Mrs. Shaw said that “little decisions that night — just timing — saved our lives.”

At one point, when they were being led out of hiding, gunfire broke out in the corridor. “My life was saved because as I was running I stumbled, and I think that really saved me, as I fell back into the room,” said Mrs. Shaw.

We all have a number of personal security rules we follow when we’re not traveling. Use your common sense and apply these to your travels. Some of the ones I’ve found to be universal are:

My sympathies go out to all of the people and families effected by the terrorist attacks in Mumbai. A colleague of mine said that not worrying about terrorism makes it “ok” and that bothered him. In my opinion terrorists, in particular Islamic extremists, are really hampered by one major obstacle – a lack of wide support.

Attacks like the ones in Mumbai are designed to make headlines and give us all the feeling that “terrorists are everywhere”, when in fact they are not. Plan against common dangers and stay safe while traveling abroad, but don’t waste your time making hotel terrorism safety plans.