Targu Jiu, The Best City To Visit In 2015, Is Making Its Own Tourism Trail In Romania - foXnoMad

Targu Jiu, The Best City To Visit In 2015, Is Making Its Own Tourism Trail In Romania

There may not be a whole lot going on in Targu Jiu, the city you voted as the best to visit in 2015, but much like Craiova, the residents of this southwestern corner of Romania are deeply passionate about it.

You hear a lot about ‘off the beaten path’ places everyone seems to know about. Want to get off the regular tourist trail? Targu Jiu, and the greater Oltenia region, should be in your Romania travel plans.

The population of this industrial city has been falling over the last decade as employment opportunities have shrunk in Targu Jiu, where there aren’t a lot of industries to begin with. The Jiu River, most notable as a tributary to the Danube, calmly flows through the city so innocently, it looks like an empty road at night.

Targu Jiu is quiet, at first.

A younger couple asks, as I look over the Jiu River from the park where The Avenue of the Heroes sculptures are located, what I’m doing there. The man is a Romanian who’s visiting his childhood home for the first time in years, noting it’s changed quite a bit, but perhaps not enough yet to attract tourists.

RELATED
The Best City To Visit Travel Tournament 2013: Round Of 32

Across the street, Irish Pub quickly gathers a large crowd but the bartender is already a good friend. Step a block away though and you won’t notice it, the streets are empty, though only because the crowds are concentrated in small pockets of activity.

The Best Places To Eat In Targu Jiu

There are two really good choices for food in Targu Jiu though Antique, which doesn’t look like much from outside, is the one you’ll want to keep going back to. It has a good selection of Romanian foods traditional to this part of the country served in a cozy encompassed mansion basement. The service is great and (as you’ll get accustomed to if you visit Targu Jiu) the staff are friendly and inquisitive because there aren’t that many foreign visitors.

Your second option is Restaurant Ambassador, serving a blend of traditional and semi-food-you-find-everywhere though without the ambiance of Antique or small attention paid to the preparation of all the dishes. I mention it because Ambassador is a good choice in Targu Jiu, but Antique is a good choice in this region, reminiscent of the excellent Crama Ileana in Sibiu.

Slowly but surely, Targu Jiu begins to change from “wait, what, why, where?!” to “I am now starting to get why so many people voted it The Best City To Visit In 2015.

It was clear to me during my visit to nearby Craiova in 2014 that the local governments are trying to create a new tourist trail in the Oltenia region or Romania. By building new town squares as well as investing in promotion, cities like Targu Jiu are trying to emulate the successes of the Brasov, Sibiu, and others in Transylvania, which has become an sizeable source of income for central Romania. 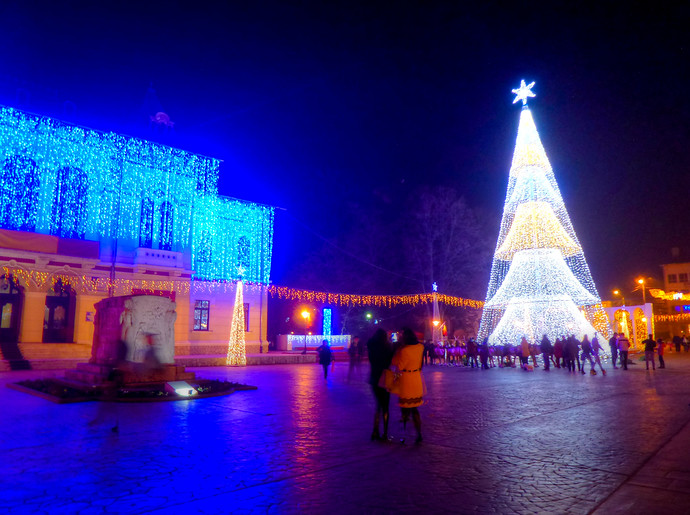 Without vampire or castles though, Oltenia is having to come up with modern attractions, advertised to the world through a grassroots campaign of locals who love their towns. Targu Jiu’s residents for the most part are enthusiastic – with typically eastern European realism – about what their city has (and doesn’t) to offer. I’m incredibly grateful to the people who voted and brought me to Targu Jiu in 2015, much like Craiova in 2014, its a place I hope more people see too.