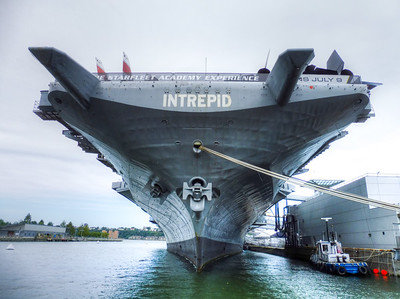 There are a lot of geeky reasons to travel so when I heard about the interactive Starfleet Academy Experience on board the Intrepid Museum in New York City, I knew I had to make it a part of my annual convention pilgrimage. The Starfleet Academy Experience (SAE) was anything but disappointing but be warned, you’ve got to be one step beyond a casual Star Trek fan to truly enjoy the exhibit.

What The Heck Is A Starfleet Academy Experience?

Essentially, the exhibit is broken down into the major fields of study seen on Star Trek, from tactical to communications. Your progress is tracked by a wrist band that digitally updates your own personal voyage through Starfleet Academy. The first stop is in medical, where you’re asked to scan an injured Klingon, and diagnose his condition based on a number of tricorder readings.

You make your way through the individual areas, taking 30 second touchscreen tests, learning a lot of sci-fi and science along the way. The creators of SAE put in a lot of thought to make every section interactive but different so it doesn’t get boring.

Admittedly, I did not expect stepping onto a transporter and watching myself beam up would be nearly as fun as it was. Or plotting a course for the Enterprise around 6 or 7 astronomical phenomena on a touchscreen the size of a large television. The longest line was for phaser practice (basically a one-person arcade shooter) which, if you’re pressed for time, can be skipped without regret.

You’ll learn a few phrases and be tested on your Klingon pronunciation as well. (If you really want to try your skills, read this post I wrote entirely in Klingon.) All of this taking place in a large area built to look like the halls of the Enterprise from The Next Generation. The effort on creating the look, feel, as well as appeal to casual and hardcore Trek fans is noticeable.

Sit In The Captain’s Chair

Given that the entrance fee is $25 (or $35 if you don’t want to be forced to visit at a scheduled time) the extensiveness of the Starfleet Academy Experience is appreciated. As you make your way toward graduation, which takes about an hour if not more, you’re welcomed with a recreation of the Enterprise bridge where you take the Kobayashi Maru test. Then, pose for countless photos in the captain’s chair, helm, security, engineering stations… and again, depending on your enthusiasm.

On the way out, you scan your wristband on last time to get your Academy results, plus a read out of the starship positions you’re best cut out for. You can have that, as well as your transporter video emailed directly to you. The Starfleet Academy Experience is open 10am-7pm daily, through October 31st. I recommend arriving early, then purchasing tickets to visit the Intrepid Museum itself, on the aircraft carrier by the same name.