Double Your Macbook Storage: A Review Of The Coin-Sized TarDisk Expansion Card - foXnoMad

Double Your Macbook Storage: A Review Of The Coin-Sized TarDisk Expansion Card 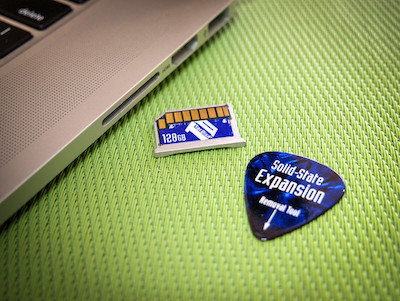 The amount of storage space on your laptop is something most people think about twice: when first purchasing a machine and after warnings start popping up that your storage is nearly full. Frequent travelers often need larger storage capacity for their laptops while at the same time trying to minimize the amount of bulk in their backpacks. The TarDisk storage expansion card is designed to expand your laptop’s hard drive space in the absolute smallest form factor possible.

What The TarDisk Is And Isn’t

The TarDisk is a piece of technology that’s evolved into a very, very specific niche. TarDisk come in two versions, 128 and 256 gigabytes (GB), both of which are only designed to work with either the Macbook Air or Pro line. (A TarDisk needs to be specifically ordered for your particular Macbook Air or Pro model.) About half the size of an SD card, the TarDisk fits right into a Macbook’s SD card reader, giving you 128 or 256GBs of additional storage.

Clearly, one of the main advantages of a TarDisk is its size. Traditional portable hard drives for travelers, a primary option for getting more space on your laptop, are bulky. Portable hard disk drives (HDD) are also a lot more vulnerable to damage, depending on whether or not you’re willing to shell out some extra cash for a solid-state drive (SSD). Durability, speed, and ease are all problems the TarDisk tries to solve, with varying success.

The TarDisk is small, as you can see from the photos and video above, tiny by any standards, especially when compared to a portable hard drive. Though this tiny size does come with some big limitations, mainly in terms of storage space. Most portable hard disk and solid state drives give you an additional 500GB to several terabytes (TB) of additional storage space.

A Seagate Backup Plus, about the size of a pack of playing cards, is 4TB at less than half the cost of a TarDisk. You’re saving money to give up durability, speed, and size for an external HDD. SSDs like the Samsung T5 with double the storage capacity of a TarDisk are aren’t quite as fast but nearly as durable, though still an added accessory with cable to carry around. Compared to a typical Macbook Pro however, a TarDisk is going to double your storage capacity.

You might be thinking you could simply swap out a few TarDisk to compensate for the size restriction but one advantage of the TarDisk has a downside. By modifying your Macbook’s (MacOS 10.12, OSX 10.11, and 10.10) operating system configuration, a TarDisk integrates with your existing storage drive. In other words, once you run the TarDisk software, it becomes a part of your Macintosh HD.

Before installing a TarDisk using their ‘Pearing’ software, you’ll need to do some prep. A Time Machine backup is required and if your laptop’s drive is encrypted, you’ll need to turn off FileVault. (Both processes can take a few hours.) Once the Pearing software has done its job, the you’ll notice your disk space is now 128 or 256GB bigger. No need to worry about ejecting an added disk or trying to remember where a file is stored.

RELATED
The Tech Gear And Gadgets I Travel Around The World With: April 2017

Being integrated like this means you won’t be able to pop the TarDisk out of your SD card slot without going through the entire Pearing process in reverse. Doing so can make your entire laptop inoperable so know what you’re getting into first. Despite the drawbacks, the TarDisk is small, only steals an SD card slot (which you can replace with a HooToo or Satechi adapter), and is faster than most external drive options.

The TarDisk probably isn’t for people already traveling with a large capactity external hard drive or two because in most cases, those are travelers who are prepared to fill up a lot of disk space with high resolution photos and videos. But for business travelers or those of you whose disk space on a Macbook Pro or Air slowly arrived at critical, the TarDisk can conveniently expand your storage.