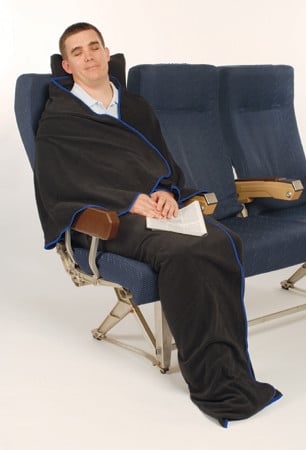 Jim Levings is a former pilot who created the Cabin Cuddler travel blanket, which I reviewed earlier this week. Jim is a fascinating fellow who was kind enough to let me ask him a few questions about his product the Cabin Cuddler, how he found out that airplane blankets aren’t washed, and his career as a pilot.

Jim, in your own words, describe the Cabin Cuddler for us.

The Cabin Cuddler is a travel blanket designed to solve the basic problems travelers have with airplane blankets and pillows on flights.

What inspired you to create the Cabin Cuddler?

I created the Cabin Cuddler about 6 years ago and got the inspiration while I was an airline pilot. I was coming back from a four hour flight and just sitting at the back of a plane. I noticed this lady trying to get wrapped up in a blanket then struggling to get up to her carry-on in the overhead bin then sitting and trying to eat a meal . As I watched her go through this process I thought to myself, there has got to be a better travel blanket that can solve the problems she’s going through.

I sketched out on napkin the basic design and gave it to my sister who is a design artist and we came up with the Cabin Cuddler.

Why this particular design?

The original design of the blanket hasn’t changed since we started. We may have made some changes to the packaging and have since included an inflatable pillow and made the tote bag reversible. We wanted to make an all encompassing blanket and pillow combination that would be easy to carry and travel with.

Your website, CabinCuddler.com mentions that airplane blankets are reused many times, spreading germs – are they not washed after each use? 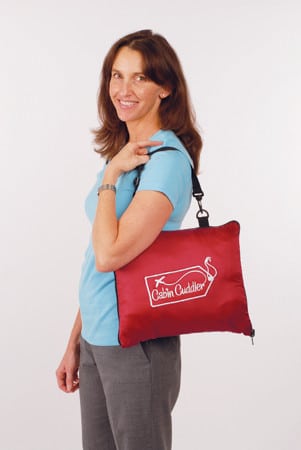 I can’t speak for all of the airlines, but let me give you a little story. I was working for a small airline making flights around the US. There were about 50 planes in our fleet and as a pilot we went from one plane to the next, but eventually I’d circle back to planes I had flown previously – it might be 3 months down the road but I’d cycle back in time. I don’t remember quite how it came up but one day the crew and I were talking to the flight attendants about the cleanliness of planes and one of us asked, “do you ever think they clean these blankets?”

I said I didn’t think so we did a little experiment. We marked the blanket tags with marker that any wash would be able to take right out. The marking was very definitive so we would recognize them. We did that on all the blankets on that particular plane. I eventually got back to that same airplane about 2 months later and sure enough all of the blankets (and pillows) we still clearly marked.

I could guarantee you 100% if you talk to any flight attendant on any airline and ask them if they would ever used any of those blankets or pillows and they’d tell you absolutely not, even if their life depended on it.

What’s one misconception most travelers have about pilots?

The pay. There seems to a perception that airline pilots make a ton of money and the short answer is that’s really not the case. Back in the day on if you were flying a 747 you could be making 250, upwards of $300,000 a year depending on how much you worked. What people need to understand however is that you only get that equipment [i.e. a 747] for the last 2 or 3 years of your career.

RELATED
What To Buy The Minimalist Traveler In Your Life

The airplanes and computer systems now are so advanced they have really amazing monitoring systems. These systems let the engineers know 50 to 100 hours before an engine may fail. All of the systems on an airplane are under extensive monitoring as well. Plus, now a days most corrections and much of the airplane control is in the hands of the computer systems which can react much quicker than a human pilot. An airplane engine is so reliable that pilots are taught that, statistically, most will go their entire career without a single engine failure.

One area of the airline industry which isn’t as advanced and really needs to be upgraded is the air traffic control systems. The technology is out there, and already on airplanes, that if the air traffic control system were updated, pilots (and their airplane computer systems) would be able to land airplanes from the top of their altitude peak with the engines on idle. A controlled ‘glided landing’…can you imagine the fuel savings?

Jim, are you currently running and specials or deals on the Cabin Cuddler?

I’d like to thank Jim for his time and insight behind the Cabin Cuddler, the airline industry, and his time as a pilot. Visit CabinCuddler.com or call (in the US) 1-800-788-5770 for more information and to place your order.