Many of the quiet ways to beat shady taxi drivers I mentioned in Part 1 take place before you ever meet the driver. The hardest part of not getting ripped off by a dishonest cab driver is when you are actually sitting behind them. I once read that being silent hides your ignorance and the less you say the more you convey. 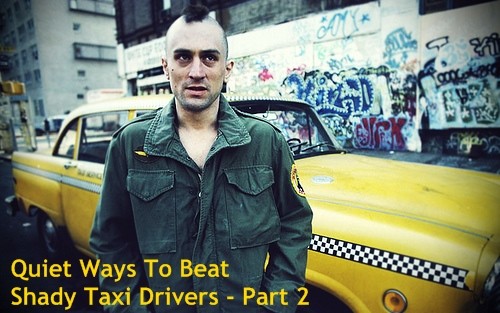 As long as you are conveying the right things you can get a strong message across that you won’t be hustled easily.

Be Cheap Not Stupid

Go with whatever ‘official’ taxis there are and don’t try to save by going in an unmarked vehicle or one that doesn’t feel right (as I almost did in India). In many parts of the world there are official or government cars. These official vehicles might be a bit more expensive but aside from fixed prices you’ll also be safer.

I can’t tell you how many sob stories I’ve heard from some drivers, in particular the older ones. They try to make you feel sorry for them in hopes that you’ll leave a big tip or be OK with a drive that’s an hour longer than it should be. Be heartless and convey it by not responding much. (Don’t engage in conversation!) 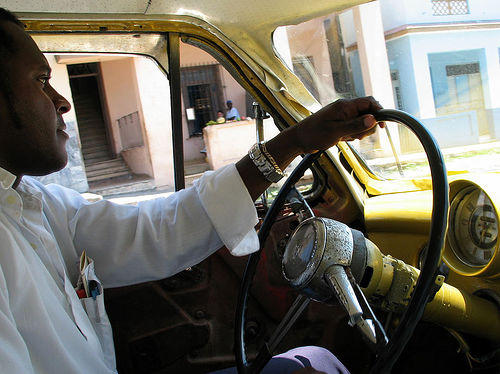 Just because a meter is off doesn’t mean that it doesn’t work. Ask the driver to turn it on and if there is a problem with it confirm the average price you researched before the ride. Based on your prior research if working meters are common don’t get in a cab without one.

Don’t Let Your Guard Down

I know I’ve made taking a taxi sound like a horrific experience but it never has to be. None of these quiet ways will work if you don’t stick with them. Like anyone else trying to scam or hustle you out of some money a shady taxi driver will work all of the angle he or she thinks will work. Stay quiet and be firm and learn to blend in. A few minutes of Googling, a straight face, and a tight lip will go a long way to keeping your fare fair.