How I Got Robbed In Guatemala and Other Hard-To-Believe Escapades: Part 1 - foXnoMad

How I Got Robbed In Guatemala and Other Hard-To-Believe Escapades: Part 1

This is the first part of a true story written by Marina Villatoro who writes the travel blog Travel Experta about everything you need to know about Central America. Every Friday over the next two months I’ll be posting another chapter of this adventure. Here is Part 1. Catch up with Part 2, Part 3, Part 4, Part 5, Part 6, Part 7, Part 8, Part 9, Part 10, and Part 11 in case you missed them. 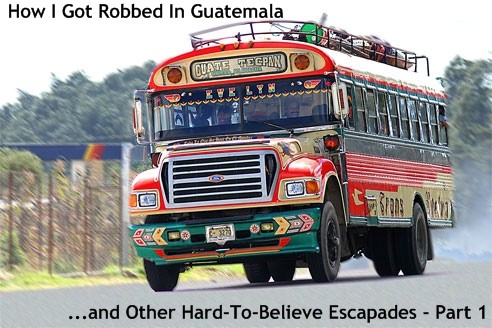 Did you ever participate in something so absurd, unless it really happened, you wouldn’t believe it?  Well… Believe this!  There are no additives or Hollywood embellishments, just the ridiculous truth.

It all began fifteen minutes after I got off the bus in the heart of Panajachel — the metropolis of Lago de Atitlan in Guatemala.  It took me over three hours on a bumpy, crater filled road, from Guatemala City, to arrive to the overly populated town, located on the lake shore amidst ancient volcanoes dotted with Indian villages.  For unbeknown reasons, it was transformed into a trendy gringo hang-out replete with chic restaurants, overpriced boutiques, hordes of tourist agencies and local markets.

Focusing my sights on a low-budget hotel, I walked through the crowded, ill-assorted streets.  Tired and cranky, I wondered why on earth hipster-travelers thought it was a good idea to buy every single Indian custom for sale and than wear them all at once. Was it to mock, to blend or simply lack of fashion sense? I shrugged it off and averted my gaze to the best deal in town and walked straight into an old acquaintance (as old as my trip, which was about two months). 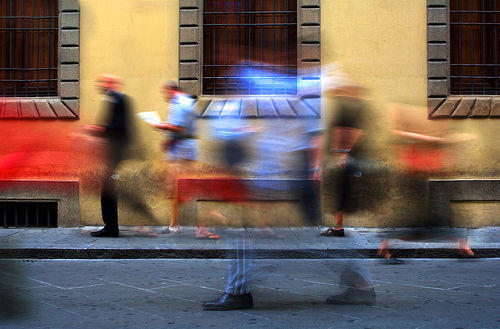 Henrik was a Norwegian I met at a popular hostel in Antigua, on his umpteenth trip through Guatemala. Antigua was a colonial city and another tourist Mecca of Guatemala best known for its Spanish schools, discos, bars and higher-end luxuries, i.e. hot showers. But for our purposes Antigua is irrelevant.  What’s relevant was our re-connection.

“What are you doing here?” I asked surprised, “I thought you were going to stay in Antigua, get a job and find an apartment?”

“Nah… I changed my mind.  Everyone left. I got bored and came here.” He leaned in for the standard peck-peck on both cheeks—very European; even though he was as European as any Guatemalan, living in the states practically all his life.

“A few days ago I bumped into some friends, and they want me to housesit for them.  You up for it? They’re over in San Marcos.  I’m headin’ there tomorrow… Whatta ya say?”  He buddy-punched my shoulder, smiled widely and took a deep drag of his unfiltered cigarette.

“Nope. It’s really peaceful, and they have two rooms, so you can chill as long as you want. And dude it’s FREE!”

What else did I have to do? I agreed.

RELATED
Which Star Wars Character Would Be Best To Take A Gap Year With?

“Do you know of anywhere I can stay tonight?” I asked, “Cheap!”

“Absolutamente.  I’ll take you to my place. It’s the cheapest in town with a bathroom and restaurant.”

What else can you ask for? 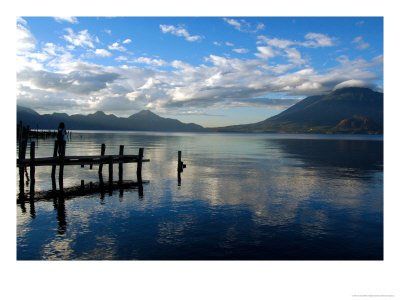 On our way we passed an internet café and bumped into Janka as she exited, also an ex-patron of the same Antigua hotel.

“I’m flying back to Holland in two weeks and wanted to see Lago de Atitlan,” she informed us after we exchanged pleasantries.  “I’ve been here since yesterday.  There really isn’t much to do…  What are you guys up to?”

Henrik, the eager host, immediately invited her to San Marcos.  She gladly agreed. Did he think that we’re going to his house?

Please don’t think this was serendipitous. Quite the contrary, if I paid more attention to my mother’s proverbial warnings: “It’s better to be alone than in bad company,” I would’ve been much better off.  But when traveling alone the desire to connect with other travelers overrode lonesome rationale.  Janka was sweet, but we’ve spoken once before our reunion.  Henrik, on the other hand, was a character I would avoid back home.  His whole life revolved around getting stoned and telling everyone he’s a musician.  He was as much of a musician as my dog. The only difference: my four-legged friend could put two agonizing notes together… sometimes. Henrik couldn’t even locate his instrument, nonetheless attempt note coordination.  Hastily, I was committed. Since Janka was going home soon she splurged on a hotel.  I’ve just begun and I was on a tight budget; hence Henrik’s recommendation for a hotel.

Backpackers, have many illusions of ‘the ideal experience’.  Always on the hunt for the best bargain, we will go to great lengths of sacrifice for a good story.  If I knew of my fate to come, I would have taken a room at a five-star resort with private maids, silver sheets, and ass-wipers.  Instead, I found myself in a 6 x 6 room, with a decrepit wooden beam referred to as “the bed”, a pet cockroach to keep me company, a stinky bathroom and the ventilation system for the restaurant, as my neighbor. On occasion I make a lousy backpacker; I cursed myself up and down for having to prove myself and paid one dollar for this price-less experience.

My fitful sleep put me in a grand mood, and I was ready for a change.  To get to any of the numerous villages tucked neatly between volcanoes and little hills, we needed to take a boat.  The choppy ride took over an hour.  Along with twenty others we hopped off the boat onto an isolated dock and I buckled underneath my sea legs. Wobbling along the narrow-wooden path shaded by palms and eucalyptus trees, I toyed with the idea of getting married (someday), buying waterfront property and raising kids in this peaceful far-away, little village…

Little did I know!

Marina has been living in Central America for over 7 years and her site Travel Experta is all about traveling in Central America. Marina loves to help people plan the perfect vacation to this amazing part of the world! Join the fun on her Facebook fan page and follow her on Twitter at @MarinaVillatoro.