How I Got Robbed In Guatemala and Other Hard-To-Believe Escapades: Part 9 - foXnoMad

How I Got Robbed In Guatemala and Other Hard-To-Believe Escapades: Part 9

The last ferry was so full that people hung over the edges and used their arms to paddle. It was one of the smaller crafts with a low-grade motor, prolonging the ride to almost two-and-a-half hours.  Nevertheless, I was grateful for any delay—less time to spend in Cat’s house. Once we arrived, I stayed as far away from Monkey’s house as possible, not even a glance in its direction.

Fear.  This was a new concept to me.  I’ve lived in New York City for over four years and frequently wandered the deserted streets of Manhattan at all hours of the day or night. Never, as far as I could remember, did fear control my actions the way it had on that Sunday evening.  Every sound was magnified to monumental proportions. By the time Janka and Henrik returned from their walk with Lannie I had worked myself into a paranoid-delusional state.

When I needed it most, my friend, Sleep, insisted we take some time apart and see other people. For the third night in a row it sowed-its-oats while I lay wide-awake praying for its return.  To fight off fear’s tentacles, I kept busy.  By sunrise, Monday morning, I splashed lake-water on my face, aired my three-day-old clothes and enviously broke up the intimate relationship between Janka and Sleep. I begged her to be my chaperon to the lady’s house.

Her directions were simple: Go to the waterfront, follow the path uphill until the cliff, turn right and don’t stop until you reach the top. 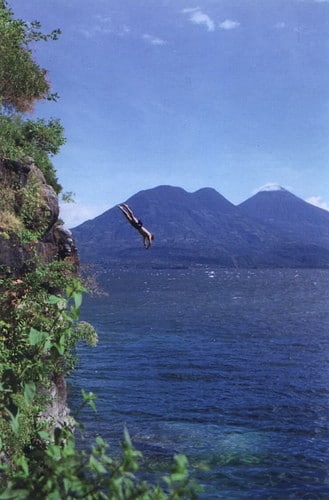 Since I’ve spent the better part of my San Marcos’ stay feeling sorry for myself, I didn’t get a chance to explore its natural beauty.  I allowed my senses to come alive and absorb everything.  Sing-Song chirps filled the air with good morning anthems and promises of a better day.  Plants, trees, and flowers drank the morning dew and blossomed into all-of-their splendor right in front of our eyes.  Up ahead on the footpath, thirty-foot jagged cliffs delved into the green-lagoon which formed a valley of water amidst cloud-covered volcanoes.  The sun hung low and lackadaisically tugged against the tips, as though one of its rays was wedged inside and wanted to be set free gracing us with last minute glimpses of its early-morning glow. Unlike the rough evening water the early hours brought absolute calmness and stillness, with an occasional breeze to help us along our hike.

At a closer look, the rocklike cliffs were erected out of oval-shaped boulders, resembling a prehistoric dinosaur nest, with too many eggs. The contents appeared to be on the brink of popping out. If anyone stepped on ‘THE egg’ holding all others in place, it would no doubt cause an avalanche into the water.  But this didn’t deter the fast-growing hippy population, whose extracurricular activities included almost-rockslides and cliff diving. Five naked bodies flailed through the air with genitals dangling around as they hit the frigid waters shrinking more than just their vocal cords as they screeched high-pitched sounds of delight.  We wiped off their splashes and turned right.

I found the ‘Path Less-Traveled’!  Away from the cliffs, the trail went from walk-able to non-existent. Confused, we spun around looking for alternate routes, but there were none.  Squinting up at the summit, with our hands as visors, a tiny house stared back at us.  Maybe there is a road from the other side and she wanted us to soak in the beauty?  Maybe she’s an eccentric billionairess hiring a helicopter each time she ventured out?  Who knew, but even a devout alpinist wouldn’t want to trek their way up and down this treacherous climb—daily.

The boulder motif was carried over to this side of the mountain.  Struggling to keep our balance with each cautious footstep; so not to trip, fall and roll down to join the happy-wet hippies, we looked like two out-of-shape dogs crawling on all fours.  Triumphantly, we reached the bamboo gate encircling the house where I instantly collapsed and sucked in huge gulps of air.  The house was situated above the tree line with a spectacular vista.  I had a bird’s-eye-view of tiny villages scattered on all sides. Thatched roofs, laundered clothes flapping in the wind, black heads rushing along dirt paths, and the mighty volcanoes: it was incredible.

Solitude In The Mountains 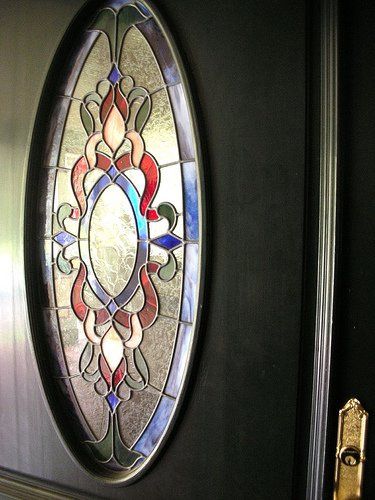 We swung the gates open after easily untying the safety latch knotted loosely with a tattered piece of cloth and walked inside.  With our first steps we crossed the imaginary line of San Marcos’ squalor into the secret world of opulence.  The small house we viewed from the bottom of the hill was an optical illusion.  This was an estate—minus stables, cabana and a pool boy. There were three houses in total: two smaller concrete structures with dry palm-leaf roofs: the servant quarters (vacated)—each one large enough for a family of three; and the main building: an architectural masterpiece—dome-shaped, two-storied, and vibrantly pink. It belonged on the covers of House and Garden or Architectural Digest, not concealed on a remote hill in San Marcos.

We knocked on a stained-glass door and waited in awe.

“Come in,” she stuck her head out from an upstairs window and waved, “I’ll be down in a second.  Make yourselves at home. There’s fresh coffee in the kitchen.”

Our shoes clanked loudly on marble tiles adorned with gentle flowers as we walked through the sunny corridor into the kitchen.  It was one of the most unthreatening rooms I’d ever been in. All counters, appliances, and fixtures were curvy and round without a single sharp edge. The sun’s bright light brought every painted-flower to life and filled the spaciousness with warmth and love.  Scent of roses wafted in through windowless frames trimmed with purple-laced curtains.  I relaxed on a wrought iron, purple chair—part of a six-piece dining room set and sipped gourmet coffee.

She finally breezed in.

“I’m so glad to see you.  I don’t think we were properly introduced yesterday.  I’m Susanna,” she extended a hand that emerged from a bright red, silk kimono and sat down next to us.  Yesterday her brown wavy hair was covered with a light pink turban today it lay snugly on her shoulders, framing a face sketched with huge features: full red lips; coin-shaped brown eyes cloaked with thick, black lashes; and a large nose, perfectly mounded in the middle of her heart-shaped face. 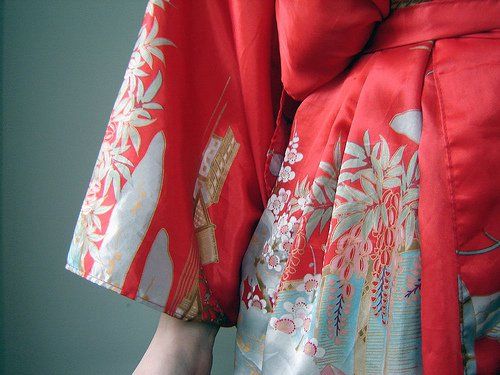 We quickly introduced ourselves and overdid it in the thanks department for the coffee.

“You have an extraordinarily beautiful home.  How long have you lived here?” I asked.

“Thank you.  I’ve lived here for almost ten years.  I’m not much of a social butterfly.  I enjoy my solitude.”

“Well… you certainly have that.  I hope you don’t mind my asking. But… How do you get your food and supplies up here?” I questioned, dubious that the route we took was the only way.

“It’s no problem. I’m friendly with a lot of the villagers and this climb is easy for them. Especially when money is the final reward,” she winked with a grin and crossed her leg exposing painted toes.

This was just the beginning to a seriously odd meeting…