Is Traveling In Northern Iraq Safe?

Probably the primary reason most people don’t consider Iraq a nation for their travel plans is due to one question that keeps coming up – how safe is traveling to Iraq? The answer to that question varies widely between specific parts of the country and changes based on whose jurisdiction you’re under. 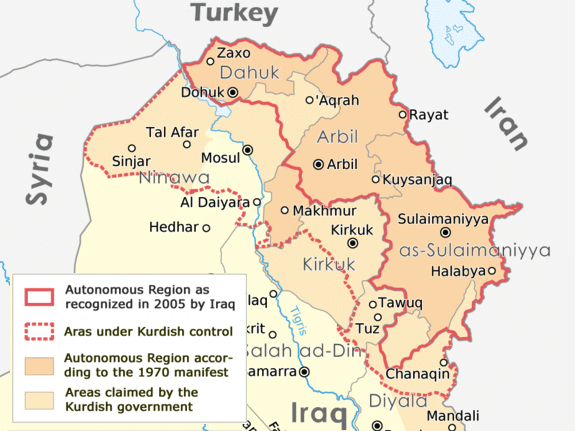 It’s important to note that the geographical region of ‘Northern Iraq’ can be broken into roughly two areas. The western half, which is mainly under the control of the central Iraqi government, and semi-autonomous Kurdish regions of Duhok, Arbil, and Sulaymaniyah. Those 3 Iraqi cities and the surrounding areas are under the control of the Kurdistan Regional Government (KRG), which acts as a largely independent region within Iraq.

The territory under the control of the KRG is realtively stable and sometimes referred to as the “gateway to Iraq”. The KRG-controlled region operates almost as its own state, with well defined (and policed) borders, checkpoints, and military. It is this physical boundary that helps insulate the Kurdish-controlled areas from much of the violence more prevalent just outside. Arbil is arguably where most travelers will enter northern Iraq and consequently the most stable. Arbil is easily accessible on several airlines including AtlasJet and Lufthansa, however most of the foreigners visiting the city are on business. Travelers arriving for the sake of tourism are by-in-large rare, and those traveling between northern towns even more so. (This fact was made even more evident by a solider Wandering Earl and I came across at a checkpoint.)

Foreigners are mostly ignored in northern cities by residents, however the opposite is true at the heavily guarded checkpoints at the Kurdish borders and in between each city. Extended questioning and delays are common and should be expected.

Although these northern areas (with exception of Kirkuk) are markedly less dangerous than other parts of Iraq, there is still a relatively increased risk of terrorism and violent crime, especially for foreign citizens.

RELATED
October 2012 Live Chat: Everything You Want To Ask About Taking A Career Break With Expert Sherry Ott

Finding reliable crime statistics in the KRG-controlled cities of Duhok, Arbil, and Sulaymaniyah are difficult to come by yet at first glance, petty theft seems to be uncommon. Hundreds of thousands of dollars in cash can be seen at many money exchange stands in the large cities; at times without a clerk on hand to watch. Attacks on checkpoints, however, are not infrequent (as recent as November 2010), bombings at major hotels not unheard of, and there is a concerted effort by various terrorist organizations to move explosive material across the Kurdish borders.

Due to its precarious geographical location, complicated political situation, and its ongoing attractiveness as a high-profile target, the security situation in northern Iraq is variable at best.

More Than Meets The Eye

The relative calmness and ordinary routine found in Arbil, Sulaymaniyah, and other northern Iraqi cities doesn’t quite convey the recent history and increased threat of violence. I never felt unsafe or threatened in northern Iraq – however many of my experiences at checkpoints might unnerve many other travelers. Traveling in northern Iraq is generally safe for travelers – but how much of that is due to the fact that there are few of them –  is debatable. The security situation in northern Iraq is improving and vastly superior to other parts of Iraq but it’s still too early to accurately assess the uncertain risks. Statistics are difficult to come by and while the KRG insists the Kurdistan-controlled areas are safe and foreign governments often otherwise, the truth lies somewhere in between.

With so few travelers in northern Iraq, chances of anything threatening your personal safety, random or otherwise, during a short time there is remote – how that will change as more tourists begin to book flights there remains to be seen.