Similar Quality, A Third Less Expensive: A Review Of The Sony a5000 Mirrorless Camera - foXnoMad

Similar Quality, A Third Less Expensive: A Review Of The Sony a5000 Mirrorless Camera 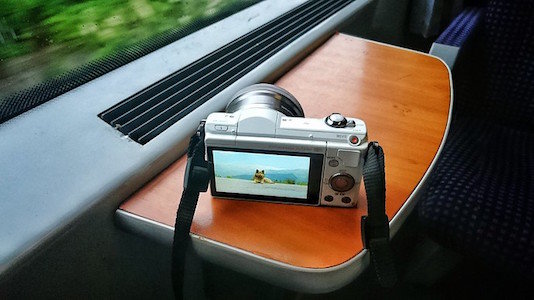 This is a guest post by Damian Irimescu, a Romanian techie and blogger who loves to write about life experiences. In his own words, “whenever I have the chance to discover a new place, I don’t think twice.” Damian recently began focusing on photography, learning baby steps, sharing those moments captured with a Sony α5000 and Xperia Z3 on his blog, Facebook and Instagram.

When I wanted to buy a new camera I found myself researching online, reading countless reviews of DSLRs, but leaning especially toward mirrorless cameras. Mostly because DSLR cameras are bulky, not ideal if you travel a lot and aren’t completely focused on photography when you do. I wanted a lightweight camera I can use in one hand without scarfing the ability to change lenses yet maintaining high image quality. (So bye bye mirror.)

Since I had been using the Sony Xperia Z3 smartphone’s remarkable camera as my primary shooter up until then, I gravitated toward Sony’s mirrorless camera lineup with high hopes.

I bought the Sony a5000 for its low price and spectacular photo quality. The a5000 feels solid in your hand and the default wide-angle 16-50 millimeter lens is nice range to get you started. Sony’s a5000 has dozens of shooting modes plus offers a lot of control with rich manual mode settings. You can see some examples of both in the photos I took below.

Compatible with Sony’s E-Mount lenses, digitally the a5000 has free-to-download tools like Photo Retouch as well as the $10 Time-lapse app, that will make even the first timer amateur photo-enthusiast feel like a pro. (Although admittedly, time-lapse should just be a feature of the a5000, but more on its video shortcomings later.)

The LCD screen is flexible for selfies and above-the-crowd shots; all of which can be posted to your smartphone, laptop, or social media accounts instantly using the Sony a5000’s wireless/NFC capability.

Even though the a5000 has optical stabilization, it has difficultly keeping faster moving objects in focus. Not to mention because of its placement, the microphone catches the sound of the lens zooming, annoyingly so. (Unless you like rocket-ship sound effects in the background of your travel videos.) Continuous auto-focus is also sluggish, so the a5000 might not be your first choice if you plan to capture a lot of action or sports video. Video is shot in full 1080p with stereo sound.

RELATED
How To Sext Securely When Traveling

A Good DSLR And a6000 Alternative

Despite its video shortcomings the a5000 is a much less expensive alternative to the a6000, which hasn’t made much strides in terms of resolving those video concerns. The photo quality however is excellent for a camera that will easily fit into most jacket pockets, taking up to 400 shots per battery charge.

If you like to capture a family occasions, holiday moments, points of interest while you travel, but want better than average image quality, the a5000 is a great low cost alternative to the newer a6000.

Thanks Damian for sharing your thoughts on the Sony a5000 with us. You can find Damian on his blog, Facebook and Instagram. If you have any questions about the camera, feel free to ask Damian in the comments below!