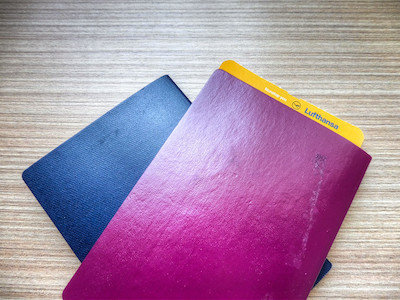 Although being a dual citizen isn’t common – it’s estimated only 1-2% of people worldwide [PDF] are one – questions about how to travel as a dual citizen are. Having two passports from different nations can get confusing when your planning a trip because the rules vary – and most nations don’t provide a lot of information about dual nationality other than: “when you’re using your other passport, you’re on your own.”

There are however some general guidelines you can follow when you need to travel with two passports, aren’t sure which one to use, or decide to take advantage of visa regulations.

Differentiate Between Passport Control And The Airline

This is where most people get confused because when you’re only using a single passport, you can practically think of immigration and the airlines in the same way.

When traveling with two passports, you need to remember that passport control cares (mostly) about your entry into the country you’re physically in – whereas the airlines want to make sure you can legally enter the country you’re going to. Also, remember to use the same passport to enter and exit a country, here’s why.

Airlines are fined if they allow someone who needs a visa to board a flight to a country that requires one of them, so at check-in when they ask for your passport, it’s one of the things the staff are looking for. The immigration personnel when they ask for your passport want to determine whether or not you can legally enter that country (either through a visa-waiver program, visa, or residency).

How To Book Your Tickets

Let’s say you want to use your “other” passport, for this example we’ll use the United States and Italy. You live in the United States, have dual Italian citizenship, and are planning a 2 week trip to Rome. In this case, you would book your flight tickets under your American passport, since U.S. citizens can stay in Italy up to 3 months without a visa. At Italian immigration, show your American passport (or Italian it really doesn’t matter in this case), then eat all the pasta you want.

Now, say you’re going to a 6 month trip to Italy (lucky you!) when booking tickets, use your American information. When you show up at the airport in the U.S., the person behind the counter will ask if you have a visa to stay longer than 3 months in Italy. You’ll just tell them you’re a dual U.S.-Italian national and show both passports. In the case you would need to show a passport upon leaving America (i.e. passport control) – use your American passport. When you arrive in Italy for your 6 month stay, show your Italian passport to passport control.

Many dual nationals tend to have questions here too, such as, “what if I decide to stay in Italy for 8 months instead of 6?” It’s important to understand you’re an Italian citizen so you can stay as long as you like. It also means if Italy decides citizens have to do mandatory military service, you can’t fall back and say, “wait, I want to be American now.”

Here’s another example – again, these are just example countries and rules – let’s say you’re a dual United States-Brazilian passport holder. You want to go to Brazil to train jiu-jitsu but know that Brazil requires a pricey entry fee from Americans. Since you’re a Brazilian national, though living in America as an American citizen, if you want to get around this fee, this is how:

Upon your return to the United States after learning a slick rear-naked choke, you simply follow the above, but in reverse.

A situation where one of your passports doesn’t have the right (aka. visa) to be in a country you have a layover in. Many of you in this thread have asked about it, the simple answer being, if you don’t have to go through passport control, it’s not an issue. Otherwise you’ll need to show the passport that is legally allowed to pass through; keeping in mind to check with the airline beforehand.

All of the above countries and visa requirements were used as examples – you need to talk to the appropriate embassy if you have specific questions or to confirm any of the above. Laws change and vary between any two nations and how they view dual nationals. Also, some countries don’t allow dual nationality in which cases you ought not to play around with the rules.

Hopefully though, for those of you who’ve been wondering how to travel with two passports, this clarifies many of your major questions. If not though, feel free to ask away in the comments below and I’ll do my best to help.