Cuba Is Not What You Think It Is - foXnoMad

Cuba Is Not What You Think It Is

There’s a romanticism behind most revolutions, particularly those associated with the now iconic images of Che Guevara. In 2015, a record number of tourists (nearly 3.1 million) visited Cuba, sharing stories online of brightly colored buildings with photos of rebellious ladies in their 60s smoking cigars. The allure of a place stuck in time and misconception, is one of the reasons many, including myself, travel to Cuba in the first place.

The passport control in Havana’s Jose Marti International Airport is in a poorly lit hall, immediately behind what is a conspicuous search of carry-on bags. (There’s a detailed list of things you can’t bring into Cuba on the immigration form.) But the friendly, if not slightly bored, faces of the passport control officers puts you at ease. Calmly you’ll walk out into the madness that is the arrivals hall, eventually finding the long, confused line to exchange currency. (The much shorter one is upstairs at departures.) Cuba has two types of currency, one for locals the Cuban Peso (CUP), the other, Cuban Convertible Peso (CUC) for tourists. The rate is 25 CUP for 1 CUC.

Cash in hand, you can see the faces of tourists from all parts of the world light up at the sight of the 1950s Chevy’s lined up as taxis, some colorful, others with fading paint. The car’s seats are boldly taped together, the doors missing interiors, but it’s amazing the vehicles are running as well as they do.

Surprisingly, Airbnb is an option in Havana, but you’ll have a less expensive stay at a casa particular. Basically, casa particulares are apartment rooms or sections of homes for rent, since law requires the owner stay on the premises. The particular place in Havana I stayed was an entire apartment floor with multiple rooms, spacious enough for 10 people comfortably.

A walk around the street below, the first person I meet is a man asking if I can help carry his bag. Travel scam warnings light up in my head but I do anyway, to see where this is going. Apparently, it’s going about 25 meters because he goes left but before he does, gives me a shot of the rum I was carrying. It’s 9:15 am. Cuba is both confusing, yet convincing, that things are certainly not what they seemed to be.

Many other Cubans are curious, striking up conversations, usually ending with some kind of veiled offer to get whatever (the wink, wink kind) you might want. The first thing that comes to mind is a bottle of water.

The heart of downtown Havana is either a rustic rebel against all the nation is deprived of or decades old buildings visibly falling apart despite any contrary effort. People in poverty, including plenty of grandmothers posing with cigars, for a price. The smiles quickly vanish after the photo is snapped or you decline a picture in the first place. Seeing those pictures isn’t ever the same afterward.

Lunch at Variedades Obispo, a local chicken and rice cafeteria hall, becomes a thought provoking internal debate on Cuba’s food rationing system. People are in a long line for eggs – 5 per month is the allowance – probably the reason small shops aren’t common; there aren’t many local shoppers.

Half-century old cars breakdown. A lot. Those polished, bright, shiny ones you often see in pictures are kept in pristine condition and parked right where tourists can hop in, for $20-30 US dollars, depending on your negotiating skills. Most of the others on the road exhale large plumes of dark smoke, but the ride is still fun, because they often have excellent speakers with good music blasting. Making the most out of the situation is what you see much of in Cuba.

No Time To Scratch Your Head

If there ever were a ride that could symbolize what Cuba is or isn’t, it’s definitely the bright red, double-decker, Habana Hop On Hop Off Bus. What’s an ordinary tour wagon in most major cities, in Havana, the bus an entertaining speedy race around corners at speeds with just enough forward momentum to prevent the vehicle from tipping over. (Watch out if you’re on the sidewalk.) Branches hang low – and I’m serious – if you sit on the top floor without paying attention the best case scenario could be a concussion.

RELATED
A Review Of HotelsCombined: A Hotel Search Engine For Hotel Booking Sites 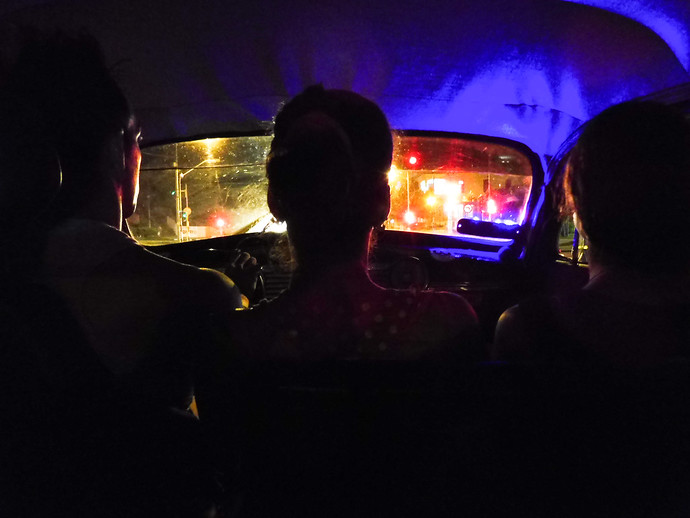 Some stops are typical: squares, and famous sights but many are big hotels. Aside from housing many tourists, these hotels are pretty much the only places (at least in Havana), where you can find an Internet connection. (And bottled water.) Controlled by access cards that cost about $2 USD for an hour of Internet connectivity, which is, surprisingly uncensored. Many Cubans sit outside of the hotels during the cooler evening temperatures, warming the air with the soft blue glow of their mobile phones. An indication, among many things, that even official salaries aren’t official.

At the end of the wild ride you’re once again slowed to a halt with a confusing reality. An empty Plaza de la Revolucion, with Che Guevara’s determined image looking down. You can’t help but wonder, is this Cuba what he and so many other revolutionaries, romantics, envisioned?

As a traveler it’s difficult to make judgements about something as complex as a society in a short visit. What you see are snapshots from a movie that’s been running for decades. Your Cuban story is colored by critic reviews, and following the advice you’re strongly recommended, talking politics might pose significant problems for everyone involved in the conversation. In a place that prides itself in planning, you appreciate how many long-lived people seem to benefit from an effective and efficient healthcare system. Conversely, the obvious poverty makes you wonder where the lines of premeditation were drawn on who and why.

Cuba isn’t what you think it is. Cuba is not what I think it is. There are very experienced journalists with enlightened insights on Cuba. What I know is what I don’t; a lesson Cuba can teach many of us.