Jabra's Elite 45h May Be The Smartest Headphones Under $100 - foXnoMad

Jabra’s Elite 45h May Be The Smartest Headphones Under $100

Jabra’s Elite 45h aren’t the best on the market – there are much more impressive and expensive headphones – but rather than water down premium features, the 45h have come up with their own. At less than $100, Jabra’s 45h are carving out a niche in the mid-tier headphone space for anyone shopping in this price range.

You can watch the full review in the video above or read on.

The Jabra Elite 45h come with a USB charging cable and carry case, neatly fitting inside since the ear cups can be turned 90 degrees. (Though oddly to only one side; when worn the ear cups face away from your body. Still, and improvement over the Jabra Move.) Those ear cups are comfortable, resting on your ears but softened with memory foam. In my use I was able to wear the 45h for about an hour before needing to readjust, though your use may vary if you’re already accustomed to on-ear headphones. 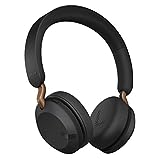 The ear cups provide “passive noise cancellation” which is essentially very good noise isolation (not to be compared to active-noise cancellation). The speakers in the Elite 45h are 40mm, largest in this class and the battery life is a very impressive 50 hours. A quick charge of 15 minutes will give you 10 hours of use; otherwise a full charge requires 90 minutes.

RELATED
A Time-lapse Of Sunset Over Tatooine, The Star Wars Sets In Tunisia

Out of the box, the Elite 45h have slightly above average sound quality, leaning toward being a bit bass heavy. They’re solid for this price but the real magic happens when you run MySound. Buried in Jabra’s Sound+ app, also very feature rich with a manual equalizer and custom sound presets, MySound is takes customization to a new level. Bringing in Jabra’s experience with microphones and hearing aides, MySound runs a series of hearing tests to turn the 45h’s sound to your ears.

It works by entering your gender, age, and then plays a series of tones to your left and right ear. When you hear a tone, you tap the screen. The entire test takes about 2 minutes and once it’s over, the change in what you hear is dramatic. Music sounds louder (it’s not) and richer. You can make out more nuance from what you’re hearing, it’s like having a different pair of headphones.

RELATED
Catching A Picture Of The Emperor At The Science Park Museum In Granada, Spain

On Ear At This Price

The Elite 45h aren’t perfect, for example the microphones often produce some mild feedback during phone calls, but they excel in new ways with features not seen thus far on sub-$100 headphones. New to the headphone space Jabra keeps innovating and the Elite 45h are a big step forward.