How I Got Robbed In Guatemala and Other Hard-To-Believe Escapades: Part 2 - foXnoMad

How I Got Robbed In Guatemala and Other Hard-To-Believe Escapades: Part 2 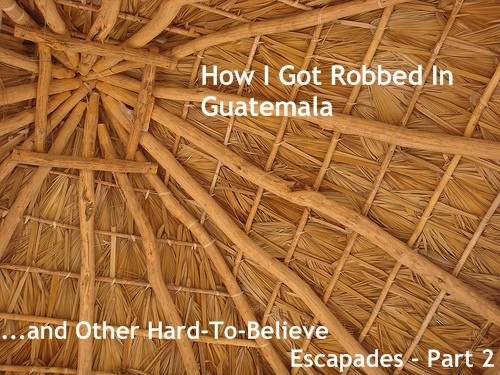 This is part of a true story written by Marina Villatoro who writes the travel blog Travel Experta about everything you need to know about Central America. Every Friday over the next two months I’ll be posting another chapter of this adventure. Catch up with Part 1, Part 3, Part 4, Part 5, Part 6, Part 7, Part 8, Part 9, Part 10, and Part 11 in case you missed them.

Arrival to San Marcos and Meeting the Host

“Hold up. I think the place is on the left,” Henrik yelled out at me while I was dreaming of settling down and raising kids in this little village.

Sure enough, not far from the dock, in the entrance way of a wooden two-story thatched-roof home, three sets of smiles greeted us.

Henrik, Janka and I slowly made our way over to them and were oddly congregated in front, banging into each others’ bags as Henrik kiss-kissed his friends. I backed up and got a better look. Leaning against the door was the most beautiful girl I have ever met. She wore a helmet-like, sky-blue knitted hat which brought out the aquamarine in her gigantic blue eyes.  Blond tinges fell all around her face enhancing a perfectly chiseled nose and chin.  She made no effort to introduce herself, instead spun her five-foot-ten-inch frame on her bare heels and began the tour of her house.

The other smileys departed without a sound.

Cat, the Owner of the House 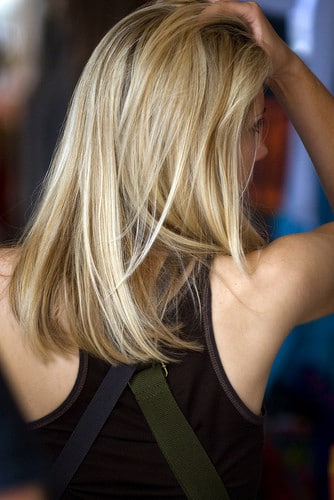 Sad to say, this girl’s beauty only ran skin deep. The instant she uttered her first word, we all cringed. Her voice was so lacking in mellifluousness that each word sounded like nails scratching a chalkboard. Dressed in an over sized T-shirt exposing a bare shoulder, Cat was the quintessential hippy.  She was in her mid-twenties, living in San Marcos for the past two years, give or take a few months, since she doesn’t believe in keeping track of time.

I have no idea what she paid for the house, but it couldn’t have been more than fifty bucks.  It was a glorified shack, without electricity, phone, and an outhouse without any water.  Apparently the dirty lake was at her disposal at all times. Why waste energy installing a plumbing system?

From the moment we stepped over the threshold, we were instantly engulfed in a dark gloom, which lingered until our exit.  I squinted my eyes into focus and looked around the living area. Filth. Dirt. Flies. There wasn’t a clean spot in sight.  Dirty clothes, encircled by flies, were everywhere. Small tables and chairs were littered with crusty dishes and spilled food. She sat down on a small mound of clothes reached in the direction of the dishes and lifted a cup infested with flies. This was the clean batch! She leaned back, slowly, and sipped a green gooey liquid. We remained standing like a bunch of fools, swatting away at the flies while she educated us on primal living.

With one swift motion she brushed off a wooden table and whipped out a deck of tarot cards.

“The moon is rising in Sagittarius…uh-uh,” she nodded to herself. “The cards are telling me today is a good day to travel…hmmm…  Great…  This confirms what my cards read four days ago.” Silence descended as she contemplated God-knows-what, stared out into space and ignored us completely. Did her entrusted tarots drop any hints that it was the wrong time for ME to travel?

Listlessly she rose content with the reading and continued our tour. Up the stairs we marched.

“Be careful. There might be some food leftovers here or there, try to walk around them,” she said.

SOME… every step on the one-time wooden staircase was a hodgepodge of garbage, dirty clothes, rotted food and dollops of flies. It was an obstacle course the marines wouldn’t tackle.

“This is where I sleep…” she pointed to a crumpled up polka-dotted comforter with three pillows. “One of you can sleep here… ok…”

We shook our heads indifferently. For us to fit on the second floor entailed standing on the unmade bed. The second Henrik stepped on to the comforter the dots came to life and a frenzied black cloud swarmed towards us. I made a beeline downstairs and out the door.

The backyard. I flew directly into a red bucket filled with decaying clothes. To support myself from not falling in entirely, I tried to lean against the swinging doors to get my balance and landed in the shitting pot. I must have let out a cry, because the rest of them hurried in my direction, to stop my fall. 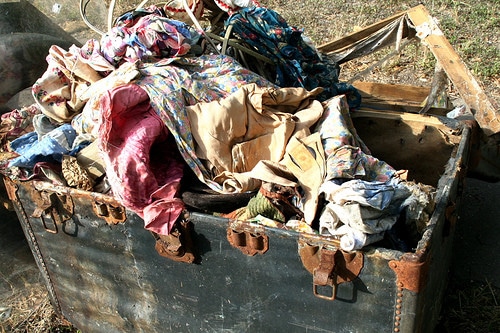 “The landfill,” she ran over to me, “I didn’t have a chance to tell you. We don’t have garbage pick up. We have landfills: biodegradable and non-biodegradable.”

During my little ordeal, the other smileys reappeared. They were the fifty-cent street fair booth cliché pair: he was rail long and she was a blimp.  Between the inflated woman’s bosom and arm lay an infant. She handed it to Cat.

Guess what… a mother and child live here!

House Sitting For A Reason

“Oh… one more thing… it’s the reason you guys are house sitting for me,” Cat proclaimed, propping the kid up with a knee and holding it with one arm. Slyly, she reached under her loose shirt and brought out a leathery flap of skin. With unnecessary force she stuck it into the child’s drooling mouth and squeezed it like a tube of toothpaste, to get the last drops of milk out.

“Sometimes I don’t have enough milk for Katia. We’ve got Lannie for that. Twice a day you need to walk her.”

We trailed her to the other side of the house and met Lannie. Tied to a medal rod, was a very tired old goat. Recently she birthed a cute, clumsy little son who hung on to her udder and stared up at us with sad, confused eyes.

“Make sure she doesn’t stay in one place to long, our neighbors complain that she eats too much grass from their yard.  Take her by the lake and then milk her. There are plenty of containers in the back for milk storage.”

Where the hell did they get a nursing goat from? Is goat milk safe for a three-month-old girl?

This explained everything (well, almost).

“You guys are welcomed to it. There’s some left in the kitchen, just leave me some, for when I get back… it takes hours to cook and I’ll need to eat something when I return.”

“No problem…” Henrik replied, anxious to get to the ganja.