Ekster’s line of slim wallets and cardholders has elegantly retained a classic wallet look, while ditching the traditional fold. Those small steps toward a truly minimal, modern slim wallet were a good introduction for those not wanting to make a major change to the way they carry credit cards. For everyone else though, wanting a modern look with a modern design from Ekster, the Aluminum Cardholder is a solid step in the right direction.

The Aluminum Cardholder isn’t marketed as a wallet but its three components give you everything you’d need to carry cards, some cash, and like most wallets… no coins. Slimmer than even Ekster’s other slim wallets, the Aluminum holds 4-6 cards in its 7.4 millimeter main compartment. The exterior space-grade 6061-T6 aluminum does scuff a bit from the included money clip but it’s certainly useful if you carry cash often.

RELATED
Jabra's Elite 45h May Be The Smartest Headphones Under $100

Around the back of the Aluminum is a “backpocket plate” to hold even more cards (up to 6) if the 4-6 in the main compartment won’t be enough for your needs.

For many, this might be too minimal a design, particularly if you’re coming from a traditional wallet. Keep that in mind for your gift buying ideas as well, someone who’s more traditional will probably be happier with one of Ekster’s more classic looks. Those other cardholders have elements – leather, folds, pockets – from traditional wallets. 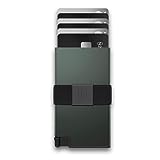 But the jump into minimalism here for the Aluminum will appeal to everyone wanting to travel light. The sleek aluminum is unassuming, fits (and doesn’t stick out) of most jean front pockets, and can be expanded with the additional plate if needed.

The Ekster Aluminum falls more inline with competing slim wallets – the metal look, thin profile – while keeping the cardholders signature switchblade card release design. (It’s definitely a strong selling point once you try it.)  On its own Ekster’s Aluminum is a nice cardholder but put into the other options Parliament, Senate, and now you’ve got a broad spectrum to choose from. From modern wallet to ultra-slim, the Aluminum is one traveler’s should take a close look at.