Kreuzberg is a section of Berlin located in the center of the city and is well known for it’s large immigrant population. The German relationship with it’s immigrant populations – especially the large number of Turks in Germany – is a complex one to say the least. For years Kreuzberg has been the focus and reflection of how choppy the integration of these communities has been.

From One World To The Next

Hopping off the Kreuzberg metro station from any other part of Berlin you are thrust into a cosmopolitan world that instantly looks and feels different. There are international restaurants, cafes, and stands everywhere (the food is excellent by the way). Kreuzberg is a colorful place in a country where monotone shades seem to dominate the architecture. The harmony isn’t completely on-key but there are small signs all around that on some levels the cultures here are learning to share a part of themselves with each other. 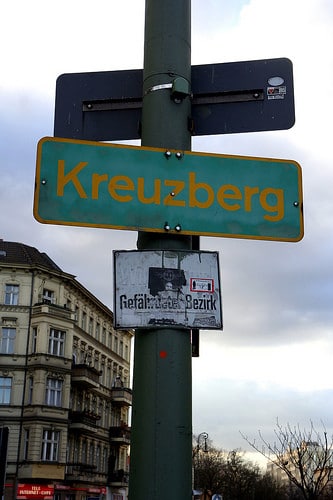 Blends On A Small Scale

You’ll find Germans ordering doner kebabs in Turkish with local vendors, cafes creating unique tastes between Indian and German foods, along side Japanese markets. Where there are small signs of integration there are also stark differences that are make for an interesting look at the changing face of Kreuzberg. I recall seeing a young punk rocker girl of 15 or so, covered in tattoos and piercings drinking a beer; a moment later an elderly lady in a headscarf sits directly across from her. The looks the two exchanged was priceless – both in complete shock at the sight of one another – it’s a picture I really wish I could have caputred. On so many levels that is Kreuzberg.

Not Completely German, Berlin, But Kreuzberg

Kreuzberg has it’s fair share of problems, including having one of the highest rates of poverty in Germany. Despite the differences between its communities both past and ongoing, Kreuzberg has something I haven’t seen in any other part of Berlin or Germany. The communities here may fall into the categories of German, Turkish, Russian, or otherwise, but they’re all a part of Kreuzberg. That culture that transcends national titles, a unique mixture that defines its inhabitants, and may be slowly bringing them together.