Rajesh Lama’s life is the kind of story you might probably associate with America and it’s well marketed the dream. What you might not know is that Germany is the world’s second most popular destination for immigrants, creating opportunities for both locals and the new members of its society who now call it home.

Berlin in many ways is a city that embodies what multiculturalism can be and at Holy Everest you’ll not only enjoy a good meal, but leave with a strong affinity for a country you may never have visited. You can watch Rajesh’s full story in the video above or read on.

Nepali Cuisine From Every Elevation

10 years ago, Rajesh was a trekking guide in Nepal’s Himalayan mountains, where he learned to cook hearty foods at altitude for his guests. Cooking is an important mountain skill to have, especially in case the other cook happens to come down with altitude sickness. Nepal has roughly three broad groups of cuisine, all representing various climate altitudes in a country that’s 75% mountainous.

As a guide he met a lot of people from around the world, first visiting Europe as a tourist, eventually relocating to Germany. After some time Rajesh made it to Berlin, a city with no mountains or obvious application of his Himalayan skill set. Yet with an instinctual sense of German efficiency fueled by a contagious passion to obtain contentment through purpose, Rajesh began to analyze his situation.

As a guide Rajesh was exposed to many cultures, different types of people, and ways of thinking. At first in Berlin he began an intensive German course to learn the language, later working in hotels where he could put his language skills to use. As time passed, he eventually got to know Berlin, coming across the street food festival at Markthalle Neun.

Noticing there wasn’t any Nepalese food at the fair combined with the disappointment that most of the “Nepali” food in Berlin was actually Indian or Pakistani sparked an idea with Rajesh.

I can’t include all of the paperwork, permits, and other German bureaucracy required to open a food stall – let alone restaurant in Berlin – but red tape is a part of everything here. Papers plus concept took nearly two years before Rajesh began selling momos, Himalayan soup, plus other mountain staples at Markthalle Neun.

That’s where I first met Rajesh and his smile is infectious. The food is great too but the cook and delivery are part of the enjoyment. At that time, Rajesh was hoping to open a Nepali restaurant one day. In August this year, Holy Everest opened at Gleimstrasse 54, in the north part of Berlin.

Hours at Holy Everest are from noon to 11pm on most days, closed on Mondays.

Part of what makes Rajesh happy is seeing other people happy. A reflection of his personal and Buddhist beliefs that are combined with a strong sense of motivation with attention to detail. The mandala in the background of our conversation was hand painted in Nepal, for instance. Holy Everest’s design is open and bright with touches of Nepal true to its roots – just look to the embroidery above or the prayer wheel by the entrance. 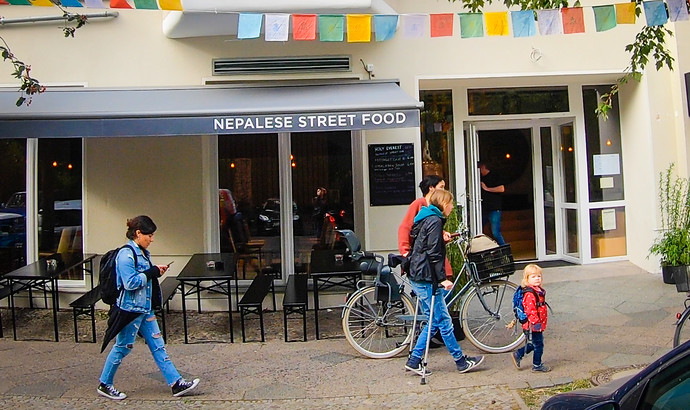 The staff are also all Nepalese and ingredients sourced from various organic, local Berlin markets. (Including Markthalle Neun.) I can continue to describe some of the dishes on the menu – designed by his wife – like badam sadeko (spicy roasted peanuts with garlic and coriander) which goes well with Nepali beer, of course the momos… or Nepalese spiced chana masala (cooked chickpeas) plus other vegetarian and vegan options.

I could describe more but it wouldn’t capture the experience you have here. I’ve focused on Rajesh’s journey to the first day Holy Everest opened its doors, because that path is infused in every aspect of the dining experience here. Enjoying the food is not enough nor profit an indicator of success. Rajesh, everyone, and everything involved to get a plate of Nepali cuisine in front of you at Holy Everest is meant to put a smile on your face. That is the true meaning of success at this restaurant and there’s nothing artificial about it, you’ll be smiling too after having a meal at Holy Everest.