In Part 1 of A Digital Pocket Guide On Northern Iraq, you learned that the KRG-controlled north is relatively safe, to bring your cash, and where to start looking for a place to sleep. 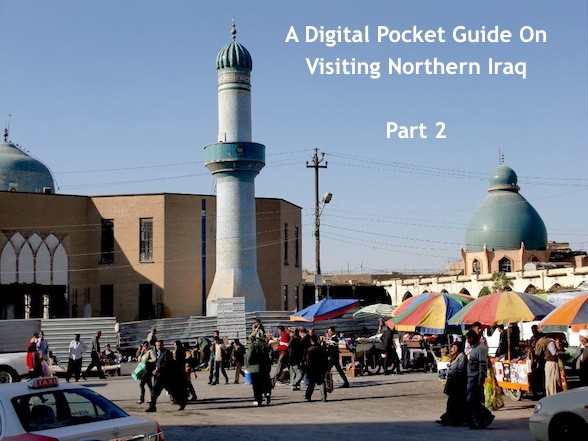 Now that you’ve laid down the foundations for a trip to Iraq, you’re ready see the unexpected sights and work your way through many-a-checkpoint.

Unless you take a flight from Arbil to Sulaymaniyah, moving between northern Iraqi cities requires making use of shared taxis. (Though yes, there are still other ways.) Shared taxis are basically that – a taxi 1-4 people share and split the cost of – to get from one city to another. The average cost, assuming 4 people in the car, between Arbil and Sulaymaniyah is 20,000 Iraqi dinar (~$20) to give you an idea.

It’s also a good idea to note the route a given shared taxi will take. Many direct routes leave the KRG-controlled areas and skim the borders for legs of the trip. While you can pay (3-4 times) more to stay within the borders of KRG-Iraq; which is considered safer, the extended drive time might not be worth the unquantifiable amount of added protection.

What To See And Do In Northern Iraq

Being a large geographic area, this is a section that really deserves to be its own (or several) posts. That said, most travelers will only have 10 days in the area and it may help you to plan your sightseeing around these particular experiences. There are also the Gali Ali Bag waterfalls in the north, Sulaymaniyah’s bazaars and parks, and my personal favorite for free wi-fi and relaxation, the Shawany Maliek Cafeteria shisha cafe in that same city.

Looking For Food In Northern Iraq

Many of you asked about the food in northern Iraq and when it comes to eating out, things vary widely between cities. Most budget travelers looking for a bite in Arbil will be hard pressed to find anything more convenient than plentiful doner kebab and falafel sandwiches. While there are restaurants with a bit more variety in and around town, the culture of eating out isn’t quite in place yet.

e cuisine in Sulaymaniyah was much more varied; although admittedly it’s difficult to ascertain what’s local to such a cosmopolitan city.

Keep in mind that in northern Iraq, places to eat close down fairly early (around 7pm). For those of you who like to snack however, finding a corner store at most hours of the night won’t be tough at all.

Finally, alcohol is readily available and for sale at a number of liquor stores and small shops around the major cities. The prices, rather surprisingly, are incredibly cheap with major brand bottles of vodka and whiskey for sale from $5-15 and beer for about $1 a bottle.

Most of the safety questions about traveling in northern Iraq revolve around the violence associated with the country in general. However, in terms of general safety, scams, and street crime, it’s far and few between. In fact, one surprising thing was how consistent the prices I was quoted were. From meter-less taxis, hotels, and markets, none of the prices were above and beyond what I was told they should have been. The streets at night, although quiet, were peaceful and was told as much by everyone I encountered. In fact, if you were just to fly into Arbil, or be dropped off in the center of Sulaymaniyah, you wouldn’t even realize the instability of war was so recent. The checkpoints and border controls are the few obvious signs of a war zone that’s right outside. Inside, all you see is that the Kurdistan-controlled north is looking forward – even if it’s still got a way to go in terms of tourism.

This Is Only A Rough Start

Such a large and complex area can’t be covered in a single post or two, but this digital pocket guide should get you off to a good start if you’ve ever considered traveling to Iraq (or are now!) It’s not the most straightforward place to navigate – which might be appealing to many travelers looking for a trail that’s not yet well worn.