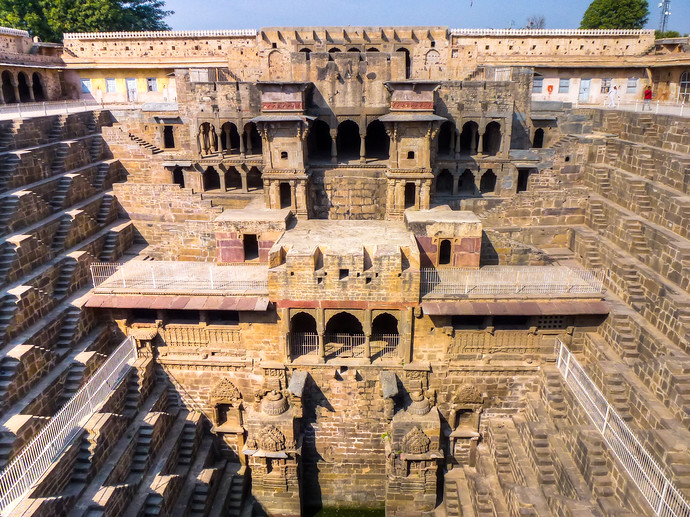 Located off a very dusty road in a village of a couple of people between New Delhi and Jaipur, India, is one of the Rajasthan states most impressive sites. So little known is the Chand Baori stepwell in Abhaneri, that nobody bothers to charge an entry fee, and on my several visits I’ve never seen more than a handful of others wandering the grounds. Isolated and mysterious, the 13 story deep (3,500 steps) architectural feat, Chand Baori was the perfect place to imprison Batman.

You’ll notice in The Dark Knight Rises that Bruce Wayne is stuck at the bottom of a pit, along with a bunch of other prisoners, and is the only one who is able to make a (literal) leap of faith to escape. Some of these scenes were filmed at Chand Baori, carefully enhanced with computer graphics. You can see the scene below:

As Bruce Wayne climbs out of the stepwell you’ll notice another famous Rajasthan view, the Mehrangarh Fort, which isn’t really close by but then again, it’s a movie about a billionaire who fights crime dressed up like a bat.

Back To Life, Back To Reality

Chand Baori was originally built around 800 A.D., when the sleepy village Abhaneri was a more active city named Abha Nagri. The Rajasthan state of India is dry and hot, so the stepwell served both as a water conservatory as well as a cool place to gather during the intense midday heat. Unfortunately, because a tourist fell in several years ago, it’s no longer allowed to walk down to the bottom to experience the several degrees cooler air once enjoyed by elites living around Chand Baori.

How To Get To Chand Baori

You can either have your back broken by Bane, or take a detour on a drive from New Delhi to Jaipur; alternatively if you’re going from Agra to Jaipur or the reverse. In any case, you’ll be going about 2 hours out of your way to see Chand Baori. India is full of visually incredible places that seemingly come out of nowhere and Chand Baori is really one of the best examples of it.

I wouldn’t say it is worth a drive from Jaipur, New Delhi, or Agra just to see Chand Baori, but chances are you’ll be moving through these cities as part of a well worn tourism trail. Don’t miss Chand Baori if you’re passing nearby, though make sure your driver knows where they’re going (and really make sure, don’t take any side head nod at bobble value). Most experienced drivers and tour guides (like my friend’s Wandering Earl Tours) won’t have any trouble getting you to Chand Baori.

A visit around the ruins generally lasts about 30 minutes to an hour, enough time for all the photos you want as well as re-imagining Bruce Wayne simply taking the steps up to escape.