People walking through airports with a phone in their face recording or live-streaming about how great airports are with a eerily exaggerated enthusiasm isn’t an uncommon sight, but no matter your particular vlogging style, audio on a phone is tricky to manage. Mobile phone mics tend to pick up much of the ambient noise so if you’re planning to upload travel videos you’re recording live, the MiracleSound Lavalier Mic might be a good fit for you. You can watch my full review in the video above or read on.

Who The MiracleSound Is For

First off, people who have a headphone jack or are willing to deal with dongles. The MiracleSound Lavalier Mic is a corded microphone that attaches to a lapel or anywhere on your clothing about 10 inches below your mouth. There are obvious audio benefits for traveling vloggers but if you’re thinking this might be a good way to improve the audio of your FaceTime calls I’ve got bad news for you. For pretty much every phone, once you plug the MiracleSound in, you’ll be able to record with the microphone, but not hear from the speakers. It becomes a one-way conversation with this MiracleSound device. 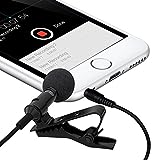 The Lavalier Mic is compact, a certain benefit for portability and the cord isn’t too obnoxious. But it’s there and for a lot of newer phones that means dongle time. A cute little miniature wind screen also does a decent job of cutting out, well, wind noise, leaving your voice with a grainy, somewhat over-condensed sound. Nothing terrible but not great either, although it’s certainly an improvement in many cases over a mobile phone’s built-in mic.

Recording On A Budget

For $20, the MiracleSound Lavalier Mic might work as a starter microphone for vloggers wanting to step up their audio game. Keep in mind this is designed for phones, if you’re carrying around a large DSLR like the Panasonic Lumix G85, you definitely need something like the Rode VideoMicro. The MiracleSound Lavalier Mic seems like it’s aging out of modern technology with improved phone microphones but for now, it still has a small place for budding travel vloggers.