The Two Best Travel Cameras For Video Under $1000 - foXnoMad

The Two Best Travel Cameras For Video Under $1000 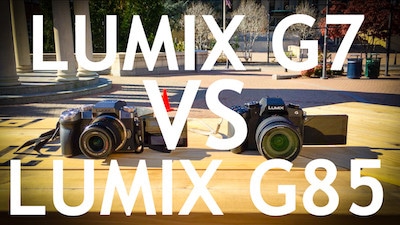 The two best video cameras under $1000 right now in late 2017 are the Panasonic Lumix G7 and the Lumix G85. Being so very similar, it can be difficult to tell why they differ by a few hundred dollars in price and if the additional cost of the G85 makes sense for you.

Both are under-priced and depending on your travel photography needs, the two best video cameras to choose from. Here are the main differences for travelers and how to decide between the Lumix G7 and the Lumix G85.

Cameras, like PCs in the early 2000s and laptops now, are so good they don’t out-date themselves quickly. The G7 was released in 2015 and the updated G85, one year later – as time goes, their prices have dropped. The G85 is around $900 and the G7 is roughly $600, both going on sale frequently.

Both the G7 and G85 are micro four thirds cameras with the same size sensor, shoot video in full 4K (the G7 has a software-enforced 30 minute limit, the G85 doesn’t), take 16 megapixels pictures, and are nearly the same physical size. Overall, there’s much more similarity between these two cameras than not, but where they diverge in particular affects frequent travelers most.

RELATED
The Best Headphones For Travel

Weatherproofing in general is a very overrated feature. Although the metal, 505 gram body of the G85 does make it feel more durable, weatherproofing isn’t waterproofing. The G7 doesn’t have weatherproofing, which protects the camera from splashes of water and dust. Though if you’re going to be shooting in the elements, you’ll need way more protection than weatherproofing anyway, like a DiCAPac waterproof case.

There are other differences too of course but the G85 and G7 are so similar for most people, you’re choosing between a few hundred dollars. You can’t go wrong with either camera – the Panasonic Lumix G85 is part of the travel gear I’m currently using – and as I’m typing this it just went on sale with a full kit for $900. But if stabilization and weatherproofing aren’t worth your $300 or so dollars, the Lumix G7 is an excellent choice, plus you can save more for travel.

The G7 and G85 are both mirrorless so if they’re too big for your light travel packing, this older Lumix point and shoot might fit your needs, or possibly your smartphone could replace any dedicated camera.