Most wireless car chargers mounted on your windshield or phone replace the charging wire with two very inconvenient arms to hold your mobile device hostage. The MagBuddy gets around this common design inconvenience by using a powerful magnet to keep your phone in place plus fast charging.

Although you might not immediately see the benefits of paying a little more for a car charger, they quickly become apparent after a few rides. You can watch the video above for my full review or read on.

The primary advantage of desktop wireless chargers is being able to quickly grab your phone but most made for the car use rubber-lined arms you have to awkwardly pry open. It’s a few seconds every time in and out of the car so, instead, MagBuddy uses a flat, thin, and surprisingly powerful magnetic roughly the size of a small coin. The magnet is about as thin as a sheet of good paper and can stuck directly on your phone or the case. 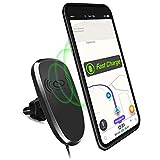 One thing you’ll have to remember is to center the magnet (not the phone) on the charger but after one or two uses it becomes second nature. Even on bumpy mountain roads the MagBuddy never lets it seem like your phone is in any danger of falling off.

RELATED
From Horizon To Horizon: The Sight Of How Much Oil There Is In Azerbaijan

The other benefit of the MagBuddy is how much faster it’s able to charge Qi-enabled phones (pretty much all newer phones that support wireless charging). Charging up to 10W is throttled but for some average real-world results, you’ll get at least a percent per minute of battery life on an iPhone X. Other phones will vary but higher-end flagship phones should be able to absorb electrical charge at autobahn speeds, if not faster.

The Price Of Slim

Clearly the MagBuddy sits well ahead of the competition, roughly 2-3 times the price of most competitors with arms and sluggish charging. Given how much time many of you likely spend getting in and out of your car on road trips short and long, $60 for the MagBuddy seems a reasonable investment for the time savings. Not to mention reducing the risk of dropping your phone every time it interacts with your wireless car charger.