The Warning Signs of Losing That Cheap Destination - foXnoMad

The Warning Signs of Losing That Cheap Destination

All travelers have that inner list of secret places we’d really like to adventure to. These places are rugged, isolated, nobody knows about them and they are cheap. That is, until one day we hear about them on the nightly news or find out a buddy has already been there. 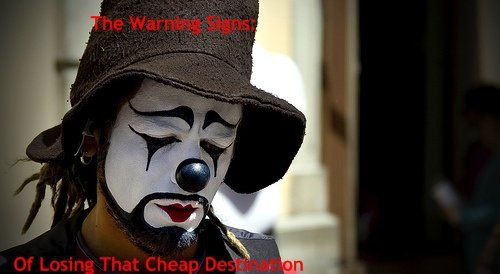 Now, that place isn’t so cheap anymore, everyone and their mother’s been there, and it’s about as rugged as Monaco. I’m not going to try and teach you how not to procrastinate and get to your secret cheap places – since I can’t do it myself – but there are some warning signs that you should look out for and watch as they progress. As soon as you see them, hop on the next flight out otherwise you’ll have missed out on your cheap destination.

The Stages of Losing The Cheap Destination

Every cheap destination gets expensive eventually in direct response to people finding out about some place being cheap in the first place. Increasing popularity doesn’t necessarily make a country or city a bad place to visit, it just won’t feel as unique. You’ll have to rely less on your wits since that place will soon start looking like every other tourist trap or Western city. You’ll have to search harder and travel farther away to get a better glimpse of the local culture, language, food, and customs – and all for more money.