One month and 6 rounds later, the last city standing in The Best City To Visit Travel Tournament 2011 is Porto, Portugal. Congratulations to Portugal’s second largest city – getting by Madrid, Sydney, Bratislava, Jerusalem, Chiang Mai, and runner-up Prague was no simple feat. Originally nominated by Stephen, he’ll receive the contest prize of $200 for being a subscriber later this week. 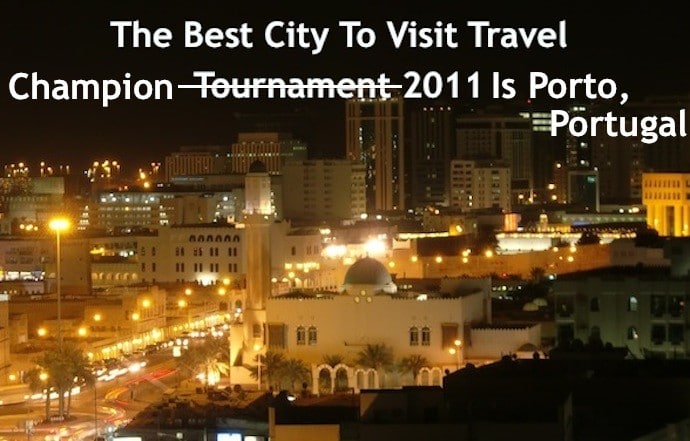 I’m Going To Porto Before The End Of The Year

I can’t not visit the city all of you nominated as the best one to visit in 2011, so sometime before the end of this year I’ll be going to Porto. Portugal is one of the few western European countries I haven’t been to yet and (relatively) nearby Lisbon is also where I’ll begin The Ultimate Train Challenge in September. That’s where I’ll attempt to break the world record for longest continuous train journey.

The Best City To Visit Contest 2012, A Macbook Air, And Another Trip For You

I plan on running the tournament again next year, with a few modifications – including allowing people to write posts to pitch their city (thanks for the idea Priyank), as well as having a pool alongside the voting. That way, you can still participate when and if the city you nominate is eliminated. The prize pot will also be larger.

This summer I’ll also have a Macbook Air for one of you and later in the year hopefully send one of you anywhere in the world you want to go. I don’t want to inundate you with plans but sometime in the coming months I’ll probably be hanging out in one place, catching up on heaps of writing, along with putting together ideas to help you travel more, for less. The best way to find out about the various contests I run throughout the year is to sign up for my bi-monthly newsletter, that group always finds out first.

You can view the entire tournament bracket in full size or click the image to view in wide-screen.

A Month Of Photos Slowly Catch Up With My Travels

RELATED
One Of These 64 Cities Will Be Named Best To Visit In 2019: Time To Vote!

I hope you’ve enjoyed the travel photos from this past month, along with the larger image format and shorter, more personal stories. Although I haven’t quite caught up to my movements (not even mentioned Bulgaria yet), we’re at least a few steps closer. Through Bahrain, Qatar, United Arab Emirates, Oman, and my favorite city in the world, perhaps we’ll finally cross digital paths in Cairo, Tokyo, or somewhere else.

Don’t worry if you missed this contest, I run several throughout the year. You can be the first to find out about the next one by signing up for my email updates, RSS feed, or bi-monthly newsletter.