How To Travel The World With Literally No Money - foXnoMad

How To Travel The World With Literally No Money

There are plenty of low budget tricks to solve big budget problems but this isn’t a guide on how to save money to travel but rather how to do it without using currency. You don’t need a cent to travel the world and there actually ways to travel without using money. While elements of “traveling for free” might sound fantastical, it’s more than a thought experiment since it’s been done successfully before.

Barter Your Way From A To B

Although we’re talking about traveling without money, you will need skills, stuff, and a bit of extroversion to make the penniless conversion. German comedian Michael Wigge, a former live chat guest on this site, started off the hard way before realizing bartering was a viable solution for his travel plans:

“At first, Wigge scrounged for food from garbage bins, but he soon realized that “Dumpster diving wasn’t necessary. I could walk in and do a barter. I offered to clean the floor or the shelf or wash the dishes in the restaurant in exchange for an old sandwich.”

Michael notes that his bartering strategy differ depending on where he was in the world:

“In Latin America, he found that “people were very helpful if I went to their door and said, ‘Can I sleep here?’ There was this helpfulness, this hospitality, maybe because many people there are poor and they know how it feels. They didn’t care about my story. But in the U.S., it was more about the story. They would say, ‘This is cool. We want to help you reach your goal.”

You can use some of Michael’s advice, which took him to through 11 countries and over 40,000 kilometers, to barter your way around the world. Here are some of the strategies he suggests on his website, How To Travel The World For Free.

Essentially, Michael turned the endeavor into a project he was able to get others on board with. Take note of that, as a developing a good website or travel blog prior to your trip, along with a healthy list of media contacts, might be enough to for you barter your way around the world with.

Work On A Cruise Ship

Not only is this a great way to earn a lot of money (up to $6,000 a month) working on a cruise ship also allows you to travel to a number of locations around the world without expenses for room and meals. Most cruise lines offer staff some time to explore the destinations they stop in, plus you’ll have the opportunity of meeting a lot of international staff. (Remember the usefulness of contact lists mentioned above.) Probably the hardest part of getting a job on a cruise ship is figuring out how to do it. There’s a lot of misinformation and even more shady sites you don’t want to waste time with. My friend and fellow blogger Wandering Earl began his world travels working on cruise ships and his book, How To Get A Job On Board Cruise Ships has all the information and forms you’ll need to get started. 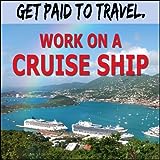 Cruising around the world is also one of the healthier ways to travel if you make use of the crew-only gym and ligher food options.

Potentially three terrifying words for some people, traveling for free isn’t always easy. Some parts of the world are also more favorable for hitching and camping in particular. Author Tom Parry hitchhiked across Australia with his girlfriend describing the difficulties, mostly in waiting around for a ride in his book, Thumbs Up Australia. Tom also shared some valuable lessons for any hitchhiker to improve their chances of getting a ride when I interviewed him.

RELATED
Is Traveling To Tunisia Safe? “There are certain essentials: get up early; find a good spot a substantial walk outside the town limits, preferably on a straight stretch of highway; attempt to be presentable but not too well-dressed; most importantly of all, have enough provisions for a lengthy wait in heat and/or heavy rain. If one is hitchhiking for a long time one should familiarize oneself with the possible routes and be prepared for any number of unexpected diversions.”

Once you get to your next stop however, you’ll need a place to stay. CouchSurfing is a site where members offer travelers a place to stay for free. GloboTreks has an excellent guide on how to CouchSurf around the world pointing out not to neglect the social opportunities (contact list!) and that it’s a lot safer than you may be thinking. Though if you’re still not convinced or would like to try it out before your freebie travels, Adventurous Kate describes how to CouchSurf without Couchsurfing.

Not For You? How To Get Closer To Free

You’ll notice that traveling without money means sacrifices, mostly to your timing, plans, and privacy. Obviously bartering around the world isn’t for everyone and you’ll need at least a tablet with an Internet connection to accomplish most everything mentioned above. You can of course work on saving more, even if you live on a third-world income, make random accumulated currencies useful, and learn to travel on $50 or less a day.