Low Budget Travel Tricks You Can Use To Overcome Big Budget Problems: Part 3 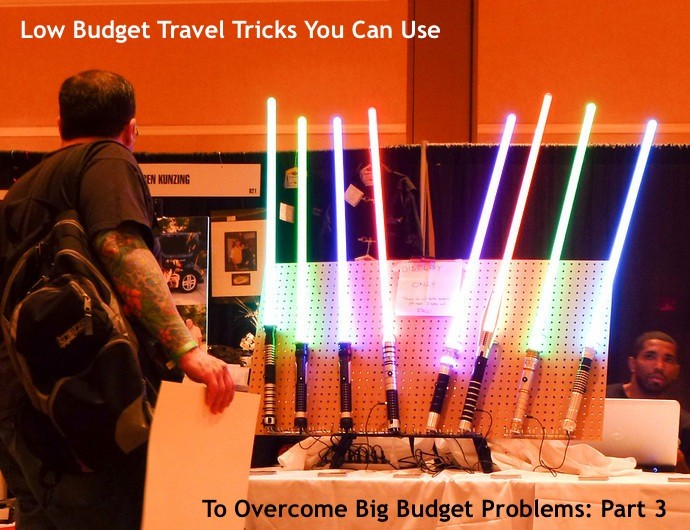 Now here you stand great traveler, with all of the power in your hands, expertly wielded with your mind. Nature was subdued in Part 1 and nicking nicked in Part 2. But with great power comes great temptation on the journey we travel. You’ll need to make new allies and rely on ancient texts to guide your quest as lord of the wings.

Upgrade Your Tech For Free From The Inside Out

I really wish I could send all of you a few thousand dollars to buy a bunch of new fancy gadgets but until I can, let’s talk about upgrading what you already have. Remember, gadgets are hardware and software – and software is often you can do something about right away. When it comes to unlocking your phone – Android, iPhone, or otherwise I’ve got you covered with my complete guide to unlocking mobiles. You can do things like add multi-tasking, games, and other apps not available directly for your version of phone. On top of that, you’ll get the added benefit of being able to choose any carrier you want around the world and at home.

Finally, if you’ve got a desktop at home, the office, or your parents house you can create your own mini cloud to backup, speed up downloads, and get around Internet censorship. Here’s how to make the most out of your desktop while traveling.

The airlines have money and can make metal tubes fly across oceans but you’ve got the world’s largest collection of knowledge at your disposal. First though, let’s go old school. Very, very, old school.

Now let’s bring out the big guns. Here’s how to use the entire Internet to stand up to the airlines when you need to.

Beat The Bling, Fight Temptation, And Shave Your Hairy Budget

When you’re already off on vacation or traveling it’s easy to dismiss the impact ATM, foreign transaction, and other miscellaneous fees can have on your budget. Avoid wasting your funds unnecessarily (imagine how many beers you could buy) by choosing the right bank before going overseas. In case that’s too late or you’re just extremely diligent, for all its faults, Mint.com does a heck of a job notifying you of fees you’ve paid but could be avoiding. From credit cards to coupons, Mint will also automatically suggest improvements based on your spending. Why think when a technology can do it for you – focus those brain cells on beautiful sunsets or amazing views – it’s what travel is all about.

How much would a week in Indonesia cost you? Budget Your Trip knows the answer to that and many other destinations. Remember preparation and anticipation is what makes the difference between a guy who gets beat up and Batman.

The road is a long one for a traveler without shoes, stamina, or smarts. You are now not one of them, armed with the knowledge of Part 1 and Part 2 of this series.