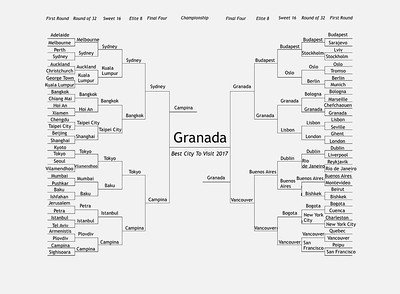 The Best City to Visit Travel Tournament is often unpredictable in predictable ways. A Romanian city advancing deep into the tournament is certainly no anomaly (they’ve been in the Championship for the past 5 consecutive years) but like in 2016, the Iberian Peninsula has stopped them one shy of the win. Granada, Spain, which has been to the Final Four in 2013 and 2015, finally got the momentum it needed from your votes to win The 2017 Best City To Visit Travel Tournament.

For the first time in 8 years when I began the best city contest, a city I’ve been to previously has won the tournament. I’m looking forward to returning to one of my favorite cities in the world, seeing how both it and I have changed since the last time. Over the next few weeks I’ll be posting my plans for visiting Granada this year, as well as catch you up on the non-profit efforts in Lisbon, Portugal, the 2016 Best City.

Congratulations also to Tianna, a newsletter subscriber of mine who nominated Granada and wins a $600 gift card to one of several online stores. Damian, who nominated Campina, has $50 coming his way, and everyone who made it to the Final Four, $25 toward your next travel gear. (You’ll be receiving emails before the end of today and need to respond by April 25th to claim your prizes.)

Thank you everyone who participated in this year’s tournament, either by nominating a city or voting. I’m going extend those thanks by expanding the prizes quite a bit for the 2018 tournament. For those of you unhappy with the selection of cities this year (there are always some haters) follow foXnoMad on Facebook so you don’t miss picking your favorite city for the 2018 tournament beginning next February.