Why Would You Want To Go To Yemen? - foXnoMad

Why Would You Want To Go To Yemen? Yemen is a country whose association in the news with terrorism, kidnappings, and unrest following its 2010 revolution has reduced tourism and hotel bookings in some places by 60%. Before bothering to research how to go to Yemen or navigating the security situation there, you’re probably wondering why you should even consider a trip.

The Easy Answer Is Socotra 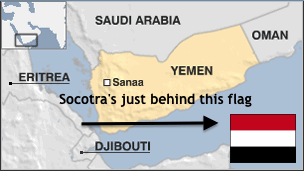 Although many news organizations, like the BBC photo on the right, omit the Socotra archipelago when displaying maps of Yemen, it’s a part of the Arab Peninsula’s only republic. Socotra’s main island (the other 3 are virtually inaccessible) should be one of the most visited places in the world. But due to its connection with the word “Yemen”, the government’s ineptitude at promoting tourism and habit of frequently changing entry requirements, only 4,000 tourists visited in all of 2011.

Evolving over 250 million years, Socotra now has 700 plant, animal, and insect species that can be found nowhere else on Earth. According to the United Nations Development Programme, Socotra is one of the top 10 most important islands in the world in terms of biodiversity [PDF]. The entire archipelago is a UNESCO World Heritage Site and personally, the island’s landscape made me feel like I were looking at another planet, appreciating humankind’s fortunate that it’s right here on Earth.

RELATED
All Of The Bizarrely Large And Controversial Monuments Around Skopje, Macedonia One Of The World’s First Sky-Scrapping Cities Is Here

Due to security-related travel restrictions that come and go on official whims however, you may not be able to get to the UNESCO Old Walled City of Shibam, located in eastern Yemen. Fortunately however, there’s another Shibam, in the safer, western part of Yemen. Approximately 20 kilometers away from the capital city Sana’a (whose Old City is a UNESCO World Heritage Site as well) its walls were also built toward the skies on the edge of cliffs, mostly to keep local invaders out.

Further mocking gravity is the “Rock Palace” in Wadi Dhar, which looks like it shouldn’t be able maintain its perched pose more than 100 meters above the surrounding town. Throughout Yemen’s Sarawat Mountain range, there are countless towns dating from the 16th century and earlier, all waiting for you to climb them. A warning though, keep your camera handy as everyone will want their photograph taken, allowing you to capture the faces of Yemen.

Then there are anomalies like Hayab. Don’t get me wrong, it too has buildings and mosques built practically into the clouds above, but it’s a clean, organized town filled with Indian Ismaili Muslims on religious pilgrimage. To sum up a rather complicated historical narrative, basically two sects of Ismailis (Dawoodi Bohra and Alavi Bohra) fled to India from Yemen in the 11th century to escape persecution from other Islamic sects. What you find today is unlike most other Yemeni towns – streets not layered with garbage and litter due to regular trash service – and inhabitants whom are distinctly Indian, not Yemeni.

Hiking Burra Mountain And The Views Of Al Reyadi

Mainland Yemen is the kind of place where your driver and guide can nonchalantly ask if you want to stop the car for some photos, pull over to the side of the road, and reveal a view where you’re looking down at clouds floating over a valley 2,200 meters above sea level.

RELATED
How To Visit Socotra Island

The views from the cliffs of Al Reyadi are so incredible they make you regret for a moment you weren’t born as a bird, Smaug, or on Krypton. Using those fine, sexy, evolved-for-walking legs of yours though you can climb up and through the fields of khat (also spelled “qat”), whose leaves are ubiquitously chewed all over Yemen in the afternoons for a mild stimulant effect. Take a rest and give the drug a try – you’ll need to commit about 4 hours of chewing to get mildly high. Don’t worry about setting aside the time, nothing other than khat will be on any Yemeni afternoon schedule.

In between the terraces of khat fields, notice the occasional coffee bushes, as you hike in the country where the beans were first brewed and turned into one of the world’s most popular beverages. Try qishr, the aromatic hot drink produced by brewing the husks of coffee berries and buy a bag near Suq al Kebab in Sana’a to take home. Visit At Hameeda, owned and staffed by women only, where they serve the best meal I had in Yemen. Notice local men eating around you – most of whom are still wearing the jambiya; a traditional knife worn on the front of a specialized belt – and recall the coral reef you snorkeled above in Socotra.

In terms of area, Yemen is bigger than Sweden, Spain, or Morocco, and despite the risks there are large portions of it that can be explored relatively safely. Hopefully now, you have more than a few good reasons to.