We are truly a remarkable species, accomplishing amazing things in a short time, like removing ourselves from the food chain, building the Great Pyramids (suck it aliens!), and making space tourism a reality. Necessity is the mother of all invention and throughout our history, the need to move weapons and troops has arisen frequently… to say the least. But what works for the battlefield – efficient transportation, communication, and navigation – has had massive benefits for us travelers today.

World War I exposed the limited capability of US trains to move solders and supplies, so in 1921 the Phipps Act was passed, authorizing plans for the first interstate highway network. The original layout, called the Pershing Map, was presented to the Bureau of Public Roads by the Army, who drafted the original design. 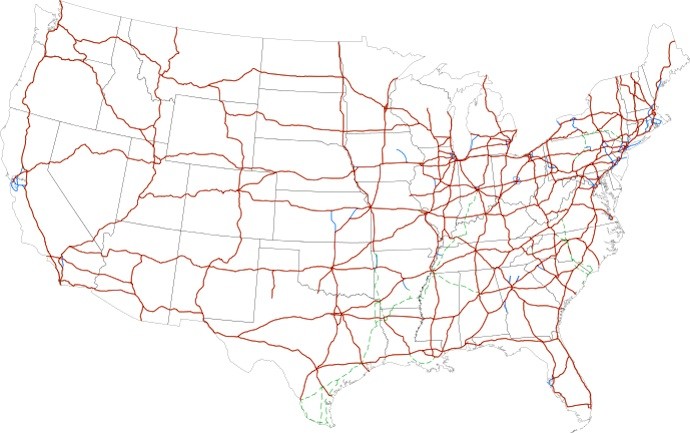 When the first GPS satellites began launching in 1978 (after development in the 1960s by American scientists Bradford Parkinson, Roger L. Easton and Ivan A. Getting) they were limited to military use only. It wasn’t until 1996 the technology was made available for commercial use so we could yell at our dashboards; GPS however still remains under the authority of the Department of Defense. We take for granted the fact that commercial planes can fly above 3,000 meters without us requiring oxygen masks, or beyond 12,000m without enlarging our hearts and permanently damaging our bodies. There’s also the bonus of avoiding most weather systems – the type that can crash planes. Although cabin pressurization was in use limited prior to World War II, it’s all of those mentioned benefits (specifically for bomber pilots and crew) that pushed development forward.

The word “jeep” might be a result of mumblers like myself mashing through the words “g-overnment purpose”; the reason they were invented in the first place. Prior to the United States entering World War II, it commissioned several companies to come up with an all-purpose reconnaissance vehicle. The American Bantam Car Company came up with the winning design, with the Willys & Ford Motor Company manufacturing the vehicles. And a durable one it was, you can still see World War II “jeepneys” being driven around the Philippines. They weren’t quite developed with the sole purpose for use in warfare, but it didn’t take more than 11 years for them to be used by the French military as a spy posts. (In 1794 against the British in Antwerp, Belgium.) Hot air balloons didn’t see widespread use in battle until World War I, when the Germans used Zeppelins as bomber aircraft. Prior to 1915 and the outbreak of World War I, once airplanes took to the skies, pilots were pretty much on their own. To reduce the amount of time it would take to receive reconnaissance information, the American Army began equipping aircraft with two-way radios. Fortunately for all of us, it made landing planes easier for pilots as well. If you love pockets, you have the British Armed Forces to thank for inventing what were then referred to as combat trousers in 1938. Quick-dry and with convenient places to pack bullets, a radio, and cigarettes, they’re still as useful for today’s travelers as they were to soldiers during World War II.

Like most technologies, it’s our use of them that can fluctuate between good and bad, rather than the innovation having some innate moral leaning. Many of the inventions above were developed to keep groups of people separate, yet connect us more than ever in today’s modern society. The lessons of battle don’t stop with the physical, you can still use The Art Of War to win battles at the ticket counter, nearly 2,000 years after it was written.