What 249 Gram Drones Mean For Travelers

There are a number of rules, regulations, and restrictions for flying drones around the world. Often, an important number you’ll find in many of the regulations is 250 grams, a weight used to differentiate between drone classifications. With the release of the DJI Mavic Mini specifically designed to weigh 249g, you might be wondering what it means if you travel with a drone.

There’s a lot of confusion regarding the current weight limits and not knowing the right rules could get you fined or worse. Here’s what you need to know about flying your lightweight drone. 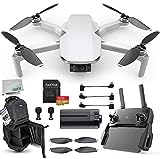 It’s important to remember that drone rules vary across the world (here’s an always up to date map, as well the mobile version), but in many United States jurisdictions and western Europe, 250 grams often marks the line between two classes of drone. Since a lot of the world has taken its drone law cues from the U.S. (one of the world’s largest drone consumers), 250 grams has become an unofficial global standard.

Drones weighing more than 250 grams are usually considering amateur unmanned aerial vehicles (UAVs) whereas 249g and less are either a lower class of drone or classified as toys.

One major point of confusion for a lot of people to clear up now – in most places with a 250g weight limit, drones weighing less aren’t exempt from any rules. For the most part, drones like the Mavic Mini weighing 249g don’t have to be registered, but all the other restrictions apply.

And if you think about it, that makes sense. The Mavic Mini is 249g but it can still fly above 120 meters (394 feet) which is most places is not allowed because that’s another level of flight space. You still need to maintain a visual line of sight (VLOS) in Sweden for example, since 249g or not, crashing a drone can still be dangerous to people below.

Drones weighing less than 249g might be able to be imported into countries where UAVs are not officially allowed but it’s important to check the specific rules that apply. As I mentioned above, this map is updated in real-time and DroneMate (Android/iOS) can put all the local laws and regulations in your pocket for offline use. It’s also worth mentioning that as drones get lighter and smaller, legislators are likely to update the rules over time to encompass the updated tech.

249g drones like the Mavic Mini make it just a little less hassle to get permission to fly a drone in some places but that’s not likely to be the case indefinitely.