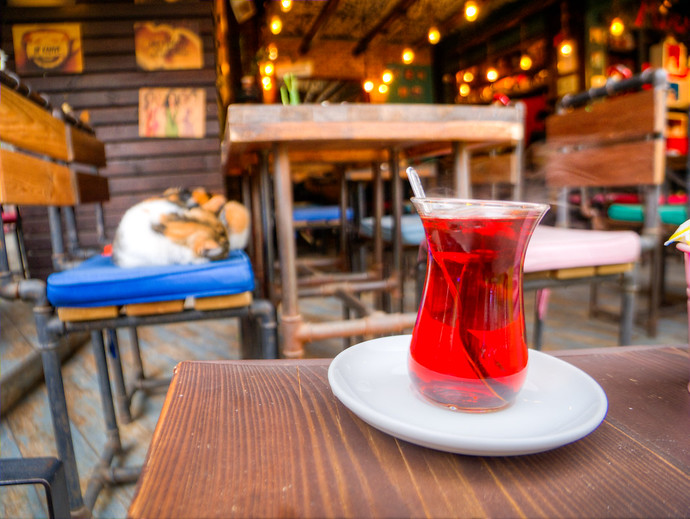 Istanbul is a massive, sprawling city, whose area and population make it better to break the city down into its neighborhoods. It should actually be 10 smaller cities but since it’s not, rather than focusing on specific parts of Istanbul (which would make this a much longer post), these are some foods that will take you a bit off the typical tourist trail.

These home-food restaurants are local, canteen-style restaurants where you can choose from a variety of home-style dishes. It’s a great way to try more traditional foods served quickly, without the need to speak Turkish (just point and choose) – not to mention lokantas are almost always very inexpensive.

You can find one of my recommendations in the video below.

Canteen style lokanta are a good way to try various meat and vegetarian dishes. Many Turkish home foods are vegetarian or vegan naturally but if you want to try some meatballs or kebab dishes, Veganarsist in Nisantasi is a good choice. The restaurant is small (they serve takeout as well) so larger groups might want to reserve in advance. Veganarsist’s meat-substitute choices are surprisingly flavorful plus the cute balcony view is nice to if a seat’s available.

RELATED
Spices For Sale At The Didube Market In Tbilisi, Georgia

Every culture has a borek – stuffed dough with good stuff in it. In Turkey however, borek is borek, and there are places dedicated to selling only borek. Borekci translates into “borek place” and they’re pretty common in Istanbul. More of a snack-stop with tea as opposed to a full meal, Gundogdu Borek vs Kunefe (Osmanağa, Rıhtım Cd. No:14) in Kadikoy is a good choice. If you’re not venturing out that way, meander through some residential side streets and you’re bound to find one.

Raw meatball that’s not meat at all, cig kofte isn’t a taste for everyone nor can everyone handle its spice. (Non-spicy is a bastardization of the whole thing, you might as well not try it.) There are a few places to try cig kofte in Istanbul but although he’s no longer there, Orhan Usta is worth mentioning. His stall outside of the Egyptian Spice Market represented an endangered tradition of independent artisans in Istanbul.

RELATED
The Differences Between Traveling In India And Pakistan

Serince Cig Koftecisi is a good choice down from Istiklal Street.

A Few Other Options

In most cases eventually good places to eat in a city are found out by tourists. The beautiful views from Ortakoy don’t hurt either but it’s still a good place to visit for kumpir. You can see how to order and some of my recommendations on the best stalls in the video below.

None of this is to say touristy areas aren’t worth visiting, the Hagia Sophia doesn’t look a day over 1,000 (do it for the gram). But a lot of touring around will make you hungry and possibly thirsty as well, in which case you should learn how to drink raki like a Turk.