The Center Of Birmingham's Balti Triangle: A Review Of Adil's Restaurant - foXnoMad

The Center Of Birmingham’s Balti Triangle: A Review Of Adil’s Restaurant

Did you know there was a balti triangle in Birmingham, England? Literally, an area so famous for introducing this northern Pakistani cuisine to the United Kingdom, the unofficial “Balti Triangle” is even listed in Google Maps. Don’t know what balti cuisine is? One of the best places to find out in the UK is at Adil’s, in the heart of the Balti Triangle.

You can see more in the video above or read on.

Originating in northern Pakistan, specifically the Baltistan region bordering China, balti is the name of the wok style dish the food is served in. Not only is the balti reminiscent of the Chinese wok, many flavors of course blend over ancient borders as well. Balti is a solidly spicy base of tomato sauce flash fried and traditionally served with vegetables as well as goat or lamb meat. At Adil’s you can order vegetarian varieties (no meat, more veggies) if you prefer. 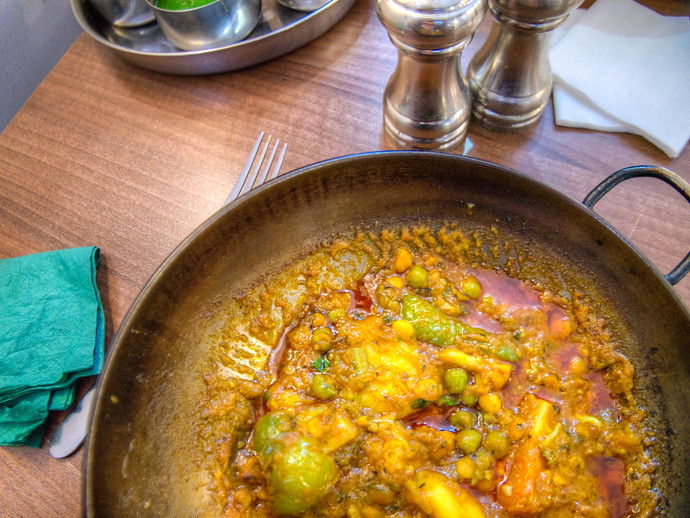 Adil’s, in the 1970s might very well have been the first restaurant to serve balti cuisine in the UK. It’s in the southeastern part of Birmingham which has an Asian population of roughly 26%, 13.5% from Pakistan. Adil’s is well known in the area although opinions vary to whether or not it’s the best balti food in town.

Meals typically begin with a starter of papadum, a flat, thin fried bread cracker you can dip in various sauces. Those sauces vary from yogurt-based in garlic, to mint, plus onions or sweet and sour. You’ll also find more familiar appetizers like samosas as well. Keep in mind that alcohol is not served at Adil’s but they don’t restrict anyone from bringing their own. Literally everyone at the restaurant came in with their own bottle of wine so don’t feel uncomfortable doing the same if you want a merlot or Amstel with dinner.

Inside The Balti Triangle

Being “the best” might be subjective but the preparation of balti at Adil’s is straightforward, using flash frying techniques in vegetable oils with traditional masala spices.The restaurant itself isn’t very large, holding about 50 customers, getting much more crowded after 7 in the evening.

Each balti has a spice flavor that will slowly creep up on you, requiring the occasional break for your taste buds to recover. The food isn’t so hot though that you can’t taste anything, it’s satisfying without being heavy or extreme. Anyone who can’t do spicy though, make sure you tell the server you want your balti as mild as possible. Make sure you get some rice (cooked with or without more vegetables if you prefer) or over-baked naan bread to continually cleanse your palate.

The Balti Triangle is a culinary adventure in Birmingham, a surprisingly low key city considering it’s England’s second largest. Most of the south Asian cab drivers I spoke with had a favorite balti place, giving me plenty of recommendations. Inside the triangle is certainly a good way to spice up a trip to Birmingham, worth taking more time to explore.

RELATED
Is Traveling To Tunisia Safe?