Nominate Your Favorite To Win $300 In March: The Best City To Visit Travel Tournament 2012 - foXnoMad

Nominate Your Favorite To Win $300 In March: The Best City To Visit Travel Tournament 2012 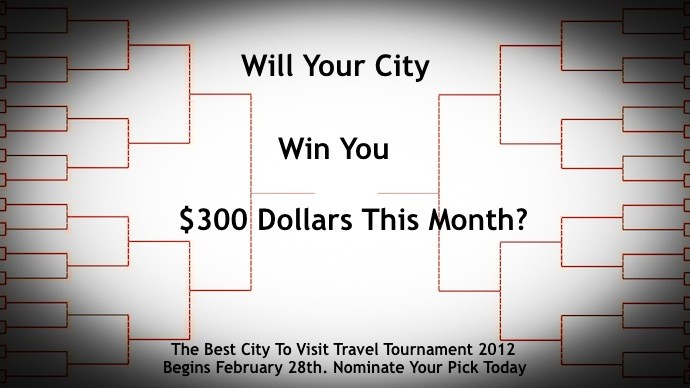 This is probably the easiest travel contest and $300 dollars you’ll enter to win all year. The 4th year of The Best City To Visit Travel Tournament begins next week.

All you have to do to enter is name your favorite city in the comments of this post before next Monday, February 27th at 12:00pm US EST. Since my newsletter subscribers got word of the contest yesterday (they’re always the first to find out but don’t feel left out) these cities are already taken. Each person can choose one city except these and any others listed in the comments section already.

That’s 16 spots taken and 112 remaining. Feel free to choose a second favorite if your city is already taken! Notice also that last year’s champion Porto hasn’t been selected so it’s up for grabs to whomever nominates it first.

Dates, Deadlines, And How The Tournament Works

By next Monday, February 27th 12:00pm US EST we’ll have 128 cities. The Best City To Visit Travel Tournament is a single-elimination tournament. Voting will begin Next Tuesday, February 28th to seed the cities (determining match-ups) and that Friday readers will begin voting that 128 group down to 64. Each week, through voting, the cities will be halved until there is only 1 remaining.

The person who originally picked that winning city will receive $300 from yours truly. And, as I did last year, I’ll visit the winning city before 2013 rolls around.

Voting will happen on these dates, so get your mouses ready!

RELATED
A Look Back At The Winners Of The Best City Contest: An Instagram Photo Essay

The winner will be announced on Tuesday, April 2nd and prize money sent out before the beginning of May.

Winners Come In All Sizes

In 2009 it was Sydney, Australia, in 2010 Zermatt, Switzerland, and last year Portugal’s Porto took the top prize. Those are cities with an average population of 1.9 million and none are in the top 15 of most visited cities in the world. That doesn’t mean that you all didn’t vote them the best and that your favorite doesn’t have a chance, no matter how big or small.

Remember, click here to the comments to nominate your favorite city before next Monday, February 27th at 12:00pm US EST. Good luck to you all!

Bonus: Sign up now for my RSS feed or daily email updates during the entire tournament month of March and win, I’ll add $50 to your prize.