What's In That Pipe And Who's Smoking It: An Introduction To Shisha Around The World - foXnoMad

What’s In That Pipe And Who’s Smoking It: An Introduction To Shisha Around The World

The tobacco water-pipe, nearly 600 years old known as a hookah, shisha (many parts of the Arab world, including Egypt), argile in Syria, nargile in Turkey, and galyan in Iran, is an integral part of Middle Eastern cultures whose misty clouds of smoke are often a mystery to visitors. No, they’re not getting everyone high on the streets Cairo – well, not technically – and each puff isn’t quite the equivalent of smoking a pack of cigarettes. While shisha (the term I’ll stick with for the rest of this post) contains plenty of nicotine, it’s not what hooks it into life around the Arab world; it is something entirely more addictive about that culture in general.

Shisha – What It Is Exactly And Are There Drugs In It?

Shisha’s fundamental components consist of a (specialized) charcoal at the top that heats flavored tobacco beneath it; both separated by a piece of aluminum foil. The downward force for the heat is provided by two dedicated human lungs sucking in tobacco smoke through a hose. In a public setting, the tip of the hose is capped with a removable plastic piece, so you’re not sharing germs with others who’ve been smoking the same shisha. Traditionally, the tobacco air isn’t inhaled, but rather enjoyed more like a cigar, by keeping the fruit-flavored smoke in your mouth before exhaling. Cigarette smokers and others though do inhale the smoke however, which often produces a slight buzz and a lightheaded feeling, primarily due to carbon monoxide (CO) accumulation in the blood. That effect typically lasts 3-4 hours, the approximate half-life of CO, in the body at most altitudes.

It’s not so much hearing about the mild woozy effect that leads many to conclude there’s marijuana in shisha, but rather the appearance of the water pipe itself, which many associate with a bong. 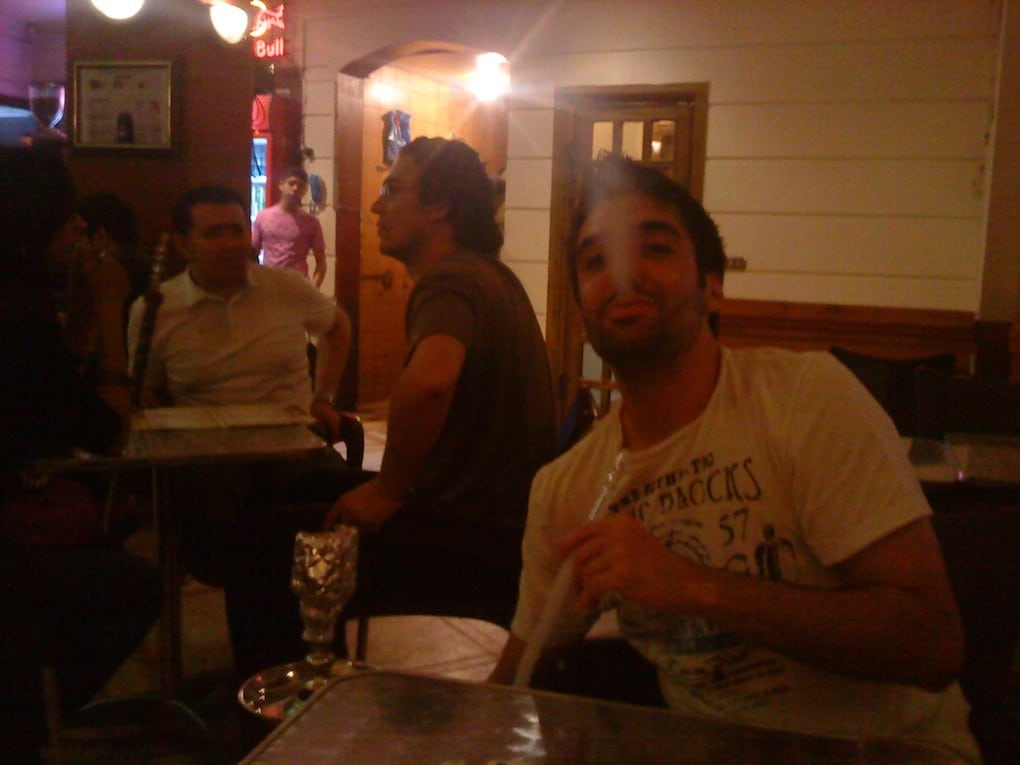 I was quite perplexed last year while smoking shisha (nargile in Turkey) by the Mediterranean waters off Fethiye‘s coast to notice an entire British family wide-eyed starring at me. They were looking at me as though I were a green alien or had 7 arms. I kept looking over my shoulder and wondering if I had forgotten to wear pants that day and eventually asked the waiter what was going on. He told me the family was wondering if I was getting high and what exactly I was smoking. They seemed quite disappointed to find out it was tobacco only. Especially the mom.

Although you can put marijuana or hash (very popular in Arab subculture) in shisha, it’s not part of the usual mix. That’s not the traditional allure of the pipe which has roots in places from Nepal to Morocco and is spreading worldwide via seeds of Arab immigrant communities. The peoples of the Middle East – not just Arabs – are generally cafe cultures. Spain has its siestas and Oman has its shisha to get through the working day. Sips of tea and puffs of shisha at cafes typically crowded with men (though that is changing across much of the Middle East) is where you exchange the troubles of the day, exhaling both literally and metaphorically. You smoke a cigarette for the quick nicotine fix but a shisha for the conversation, relaxation, or both.

Gaining Ground Where It Was Once Found, Now All Around

While shisha as been quite popular throughout most of the Arab world (with a few notable exceptions publicly in places like Saudi Arabia), it’s prevalence elsewhere has brought it back to life in places more familiar with it. The hookah, it’s mostly agreed, was originally invented during the 1500s by the Persians, in what is today northwestern India. Since that time it became passe over the mid-to-late 1900s in places like Turkey and India, something considered too arabesque for rapidly modernizing societies. Shisha and the cafe ambiance around it, continued to spread during that time as Arab communities established themselves in many parts of the world. Popularizing shisha across South Africa, the Philippines, and (especially) Europe – pretty much anywhere you have Arab or southeastern immigrant populations, it has come back strong in places looking west but reexamining their eastern roots.

What we eat says a lot about where we came from and as cuisine travels around the world, so does the history, culture, and people whose tale it tells. Apparently the same is true of what we inhale as well. Aside being packed with marijuana, there are some rather common myths about shisha not matter how familiar its smoke is to you.

So, in one 45 minute session of shisha smoke you inhale about 2.25 milligrams (mg) of nicotine, versus the average 6mg per packet of cigarettes. As for NFDPM, it’s roughly 245mg per shisha session and 120mg per cigarette packet. Lastly, when it comes to carbon monoxide via shisha you’re getting a total dose of 42 parts per million (pm) CO and a heavy smoker has about 35 ppm on average.

To add things up, a shisha session (where you inhale) gives you less nicotine, more NFDPM, and about the same CO as a pack of cigarettes according to current research.

Perhaps the biggest myth about smoking shisha is why it’s done in the first place by the peoples who enjoy it so much and often.

Conversations Around The Coal

Much like eating paella in Spain, drinking raki in Turkey, or fika in Sweden, it might be the food, alcohol, or caffeine that brings you to the table but it’s company that keeps you there. Ordering coal after coal (free without charge – you pay for the hookah once) people help their shishas keep up with the conversations gently blowing into the air all around them.